LatinaLista — Ever since Congress made it known that they were willing to cut funds to the US Census, namely scrapping the American Community Survey, the US Census Bureau has been put on the defensive. 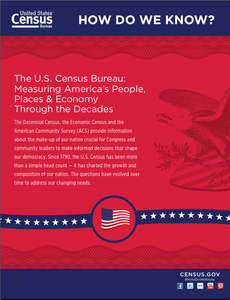 In video presentations and releases, officials with the US Census Bureau have tried to show the public why the work they do is so important to the nation. The latest show-and-tell is the launch of a new Census initiative called “How do we Know.”

Capitalizing on the nation’s interest with Pinterest, the picture-centric social media platform where users share images, the US Census is creating more infographics and interactive features as part of the new initiative. Clearly, it’s a way to make the information they’re in charge of gathering more easily understood by the public — and Congress.

The first infographic is in honor of Independence Day.

As we celebrate this Independence Day, we reflect on how our Founding Fathers enshrined the importance of statistics in our Constitution as a vital tool for measuring our people, places and economy. Since 1790, the U.S. Census has been much more than a simple head count; it has charted the growth and composition of our nation. The questions have evolved over time to address our changing needs. Today, the Decennial Census, the Economic Census and the American Community Survey give Congress and community leaders the information they need to make informed decisions that shape our democracy. These statistics are how we know how our country is doing.

The first “How Do We Know” is a downloadable pdf with enough images and interesting facts and trivia to make it a fun read for even the most casual history buff.