Latina Lista: News from the Latinx perspective > Latino Politics > Latinos not the only target of National Voter Registration Day

Latinos not the only target of National Voter Registration Day

LatinaLista — Only 15 days left till the October 9 deadline to register to vote. To make sure that both adults and eligible students are aware that time is running out, today has been designated National Voter Registration Day. 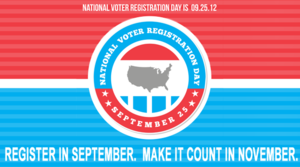 Across the country, organizations are sending their members door-to-door with reminders and voter sign-up sheets — and a message that this election is not a done deal. With news that as many as 10 million Latino voters could be kept from casting their votes due to new Voter ID laws passed in 23 of the 50 states, there is a renewed sense of urgency among Latinos.

And not just in the Latino community.

Women and students could also be impacted by these new Voter ID laws. The National Women’s Law Center released A Woman’s Guide to Voter Suppression factsheet that details just how these new laws go beyond making sure only legal voters exercise their voting privileges.

Students, who are new voters, suffer the same threat of being disenfranchised at this year’s election. The Brennan Center for Justice wants students to know the requirements for registering to vote in their states and so published on its website the 50-State Student Voting Guide.

Among a population that is accustomed to doing everything from buying movie and airline tickets to shopping online, the student guide makes clear which states don’t allow for online registration. For example:

Texas does not accept online voter registration, so all registrations must be either mailed or completed in person.

California has, however, passed an online registration law that may go into effect before the November 2012 election.

The law did go into effect and California joined 13 other states that have online voter registration.

There is currently a push in Congress to make online registration a national standard with the Voter Empowerment Act, but for the meantime, most across the country will have to be satisfied with only using social media to spread the message of voter registration.

And from past experience, social media is now known (officially) to be very effective.

A new study conducted by scientists from the University of California, San Diego and Facebook’s data-science team, and published online in the journal Nature, found that Facebook may have created 340,000 extra votes in the 2010 election.

It’s the kind of results members of at least one political party want to see repeated because it literally makes the difference between a win and a loss.

featured, Latinos, students, voter registration, women
Previous Post Understanding just how far back in nation's history has been the fight for the right to vote
Next PostRomney's behavior at Univision event underscores belief he's already lost the Latino vote