NAACP report highlights current efforts to keep Latino, black, the low-income and youth from voting in 2012

LatinaLista — “We are experiencing an assault on voting rights that is historic, both in terms of its scope and intensity.” 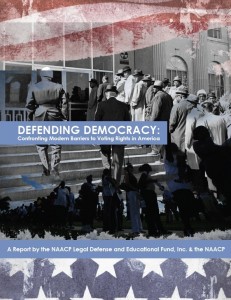 That one line that sums up the foundation for a new report released today by the NAACP Legal Defense and Educational Fund titled DEFENDING DEMOCRACY: Confronting Modern Barriers to Voting Rights in America.

As a result of the 2010 Census and the anticipation building for the 2012 election, political parties are changing the rules when it comes to voting in elections. In addition, they are going to court, across the country, over newly redrawn redistricting maps. The maps are being challenged, in most cases, because one side, in trying to boost their party’s electoral strength, is disenfranchising some groups of voters.

Usually, it’s the voters who are the most vulnerable.

The NAACP report found that:

Fourteen states enacted a total of twenty-five measures that will unfairly and unnecessarily restrict the right to vote and exact a disproportionate price on African-American and other voters of color. Dozens more restrictions have been proposed nationwide, in a coordinated assault on voting rights.

Several of the very states that experienced both historic participation of people of color in the 2008 Presidential Election and substantial minority population growth according to the 2010 Census are the ones mounting an assault to prevent similar political participation in 2012. These states include those that experienced the largest growth in total African-American population during the last decade (Florida, Georgia, Texas, and North Carolina), and three states that saw the highest growth rates in Latino population (South Carolina, Alabama, and Tennessee).

Some of the vote-blocking tactics have included: Making voters show proof of citizenship in order to register to vote; reducing the opportunity to do early voting or vote by absentee ballot; making it difficult for people with felony convictions to vote and purging the voter rolls.

The report cites the Brennan Center for Justice as saying:

These block the vote efforts could impede as many as five million eligible voters from registering and/or casting ballots in 2012. While the sheer volume of the affected eligible voters is alarming in itself, the threat is compounded when you consider that the effects will not be felt evenly throughout society.

In the context of state photo identification requirements, for example, an astonishing 25% of African Americans (over 6.2 million African-American voters) and 16% of Latinos (over 2.96 million Latino voters) do not possess valid photo ID.3 By comparison, only 8% of whites are without a current government-issued photo ID.

It was the 2008 election that increased voter turnout for blacks, Latinos, Asians and youth — effectively giving the election to Democrats. So, it’s not surprising that the Republican Party does not want to see a 2008 repeat and has been the main force behind these new restrictive voting measures.

The degree to which these voting block measures have been implemented defies reason.

For example, a New York state Supreme Court judge recently rejected a lawsuit by Senate Republicans to overturn a state law that counts prisoners in their hometowns during the redrawing of legislative district lines next year. Instead the Republicans wanted the prisoners to be counted where they are incarcerated — in GOP districts.

And one of the most bizarre cases yet seen regarding the Latino vote was in Arizona:

Supporters of Russell Pearce, a Republican state legislator in Arizona, recruited Olivia Cortes, an immigrant from Mexico, to run against Pearce in the November 8, 2011 recall election. Challenged in court by supporters of a third candidate, Jerry Lewis, Ms. Cortes’ candidacy was determined to be a sham, an effort to split the anti-Pearce vote, particularly among Latinos.

According to the judge: “Pearce supporters recruited Cortes, a political neophyte, to run in the recall election to siphon Hispanic votes from Lewis to advance Pearce’s recall election bid.”

Unfortunately, there are more stories around the country where the same deceitful tactics are being used to turn back time to an era that is considered to be the most shameful chapter in U.S. history — and one that should be left in the history books.