Latina Lista: News from the Latinx perspective > Latino Politics > New poll on youth voters’ attitudes show majority have made up their minds for 2012 election

LatinaLista — A new poll of young voters reveals that, like any other voting bloc afflicted with a collective label, young voters are not pre-programmed androids to all think alike. 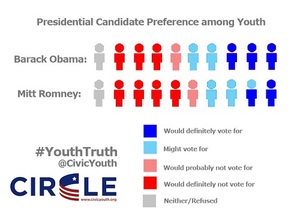 Youth-focused research organization, the Center for Information & Research on Civic Learning and Engagement (CIRCLE) launched a new awareness campaign to educate the public about young voters and their feelings during the 2012 election. Dubbed YouthTruth, CIRCLE launched the new initiative in a partnership with the Youth Engagement Fund (YEF) who polled 1,695 young citizens between the ages of 18 and 29.

African-Americans, Latinos, and individuals who have never attended college were all oversampled. The survey, conducted online in both English and Spanish, looked at young Americans’ views on the 2012 election, including their choice of presidential candidate on a range of factors, as well as issues influencing their votes and engagement this election cycle.

While the results of the poll underscore the individuality of young voters, they also reveal a demographic that while keeping up with the 2012 presidential race — and familiarity with who the candidates are — the majority lack basic information regarding basic voting laws in their states.

The poll found that 80 percent of young voters need voter information in order to cast their ballots in November. However, when it comes to the candidates and issues, the young voters aren’t lacking in knowing who or what they support.

The poll found that:

Almost 34% of respondents said they would “definitely” vote for Barack Obama if the election were held today, versus 16.1% who would definitely vote for Mitt Romney.

Barack Obama was seen as better understanding the problems of young people, by a 62.5%-27.4% margin. Obama also fared better than Romney among young survey respondents with such questions as: Has the right experience to be President; Shares your values; Stands up for your interests; Will bring change to America; Will help improve the economy.

The only question where respondents gave Romney the edge over Obama was in the question: Is a typical politician — Romney is seen to be that way by 52 percent of young voters versus 39 percent who feel Obama is.

Fifty percent or better of young voters believe in the Buffet Rule; Same Sex Marriage; and allowing undocumented youth brought to the US as children to gain legal status if they join the military or go to college.

Forty-eight percent believe that police should verify immigration status of people they stop.

“Young voters are too often viewed as a homogenous group,” said CIRCLE’s Director, Peter Levine. “The goal of the YouthTruth initiative — launched today with the release of a comprehensive, nationwide poll of young Americans — is to dispel the mythology around this group of 46 million Americans who in reality are very diverse and, given their economic futures, have more at stake in 2012 than any older group.”

YouthTruth campaign organizers want the public’s help in dispelling misperceptions or stereotypes of young voters by tweeting it to CIRCLE’s attention by using the hashtag #YouthTruth.

2012 vote, featured, presidential campaign, youth
Previous Post Latina Cubicle Confidential™ Those Curves Can Pose a Problem at Work--Should You Care?
Next PostNew report shows that over a million undocumented youth live from 'sea to shining sea'

Latina Cubicle Confidential™ Those Curves Can Pose a Problem at Work--Should You Care?
Comment
New report shows that over a million undocumented youth live from 'sea to shining sea'