Latina Lista: News from the Latinx perspective > Latino Politics > University of Arkansas sociologist advocates for DREAMers and the DREAM Act in new book

LatinaLista — For the past six years, University of Arkansas sociologist William A. Schwab has taken an interest in Northwest Arkansas’ Latino community. Since 2011, he’s conducted research on the most vulnerable members of that community — the undocumented children and youth. 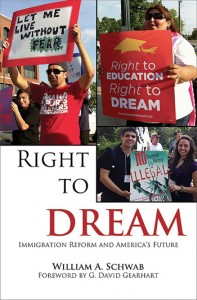 What he learned compelled him to write the book Right to Dream: Immigration Reform and America’s Future and publicly declare: “the critics have gotten it wrong.”

Published by the University of Arkansas Press and released this week, Dr. Schwab’s biggest takeaway from his years of research was that the DREAM Act needed to be passed by Congress.

Viewing the experience of undocumented youth through the discipline of sociology, Dr. Schwab debunks in his book five of the most common arguments against the DREAM Act and says that, contrary to critics, undocumented youth are on their way to assimilating more rapidly than previous waves of immigrants.

Since getting to know Latino families in Arkansas and understanding their motives for coming to the United States and staying and learning more about their daily experiences, Dr. Schwab has become a vocal advocate for a pathway to citizenship and in-state tuition for the undocumented.

On the book’s website, various videos highlight lectures delivered by Dr. Schwab on reasons why to pass the DREAM Act, along with, filmed interviews of young people describing their lives as undocumented students.

“When you know their stories,” Dr. Schwab writes, “you have to ask yourself, ‘We are thinking about deporting them? We don’t want these remarkable young people to be part of our communities and citizens of our nation?’”