Latina Lista: News from the Latinx perspective > Latino Politics > Young Latino voters turned out in greater numbers in 2012 than four years ago

LatinaLista — It’s an understatement to say that the 2012 Latino voter turnout will be analyzed, researched, surveyed and written about for years to come. In that spirit, the latest study examining this year’s voter turnout focuses on young voters. 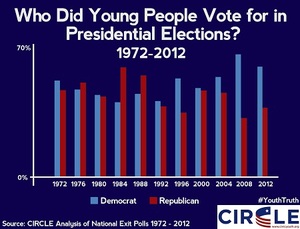 “Diverse Electorate: A Deeper Look into the Millennial Vote,” by The Center for Information and Research on Civic Learning and Engagement looked at the nation’s 23 million young voters and found that, in some areas, they mirrored closely what was found among adult voters.

With all the fear generated by the media that Latino voters, especially young Latino voters, wouldn’t show up, this survey shows that they actually turned out in greater numbers than they did in 2008 — surpassing, for the first time, Black voters.

Perhaps the most telling revelation coming out of this poll, and one which will have Republicans kicking themselves for sometime and underscores the fact that Obama was correct when questioned why Romney would lose the election, is this tidbit:

Among the minority groups, young Hispanic men were most likely to affiliate with the Republican party or consider themselves independents, but two-thirds of them voted for President Obama.

Because of future demographic trends, the Latino youth vote is projected to only get stronger and be counted as an essential factor in any analysis of the overall Latino vote.

A few more findings of the youth vote survey include: