Latina Lista: News from the Latinx perspective > Life Issues > Cartoon Network takes the animation out of the serious topic of bullying

LatinaLista — Bullying is an issue that, in spite of the increase in media awareness campaigns, it’s getting worse. According to bullying statistics for 2010, there are about 2.7 million students being bullied each year by about 2.1 students taking on the roll of the bully. 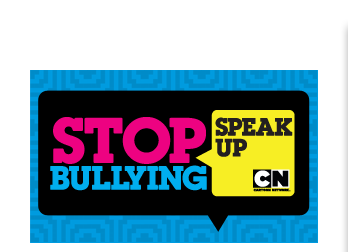 It’s revenge for school bullying that leads to the majority of school shootings according to the bullying statistics. And those students who just can’t take the physical taunts and abuse anymore and end up committing suicide are contributing to the creation a new word in the vocabulary — bullycide.

According to bullying statistics:

There’s no argument that bullying, both online and offline, is a problem. Experts say if those being bullied would tell their parents or teachers, and together they confront the bully, the likelihood is that the bullying stops.

The problem is educating more students and their families about the issue. Though the upcoming film Bully (due to be released March 30) has received a lot of attention and praise — and is the centerpiece of a new anti-bullying campaign called The Bully Project, it’s a film to be shown in theaters where not everyone who needs it may be able to see it.

The 30-minute film opens with an introduction by President Obama and showcases everyday stories of kids who have been bullied and the youth who helped them get through it, but the best part is the show will live on via the Cartoon Network’s web site and through social media and online video platforms.

Before, during and immediately following the telecast, renowned bullying prevention expert and author Rosalind Wiseman will provide further explanation of key bullying issues for kids and adults, answering viewer questions online at www.StopBullyingSpeakUp.com. Speak Up also will be posted in its entirety on the website for ongoing viewing by students, parents, educators and community leaders. Further viewing of Speak Up across multiple digital platforms will be facilitated free of charge to customers through Comcast Xfinity, Facebook, iTunes and YouTube.com, each for at least two weeks following the world premiere.

Bullying is preventable. It’s just a matter of empowering children, and anyone who is bullied, to know that no one has the right to treat them less as a person.

featured
Previous Post On Patriotism and Civic Duty: An Evolutionist's view on what makes a true American patriot
Next PostYoung Latinos listen to classmates more than friends or family when it comes to going to the polls

On Patriotism and Civic Duty: An Evolutionist's view on what makes a true American patriot
Comment
Young Latinos listen to classmates more than friends or family when it comes to going to the polls