Latina Lista: News from the Latinx perspective > Life Issues > Children > Couple taking the message of citizenship to children across the country

Couple taking the message of citizenship to children across the country

LatinaLista — On January 27, 2012, a retired couple, Diane and John Eckstein, packed up their mobile home and began a cross-country journey with their dog Kipp. Unlike most retirees who want to make time at the end of their careers to leisurely see and enjoy the sights of the country, this couple is working hard. 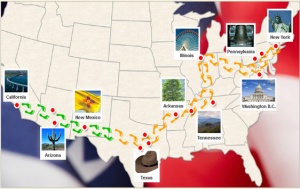 They are visiting 18 cities, from San Diego to New York City, to promote awareness of something most people really don’t think about, unless they’re from another country — becoming naturalized citizens. On top of that, the couple is also reaching out to young people and their teachers with a curriculum that teaches students how to be engaged citizens.

All in all, this retired couple is making history.

Diane Eckstein is a board member of Citizenship Counts, an organization whose mission is:

to educate young people on the tenets of citizenship, encourage them to appreciate their rights and responsibilities as Americans, and give them an opportunity to celebrate their citizenship by hosting a naturalization ceremony or participating in a service learning project.

It’s that naturalization ceremony that is taking on historic proportions.

Because the organization wants to make the subject of citizenship as personal, up close and real as possible to children, selected schools in each of the target cities are being chosen as sites for naturalization ceremonies. In almost all of the school districts, it is the first time such an event has been hosted on school property.

The reason the Ecksteins are undertaking such an exhaustive trip is simple: “We are proud to be Americans,” the Ecksteins say, “and hope that our journey will inspire and educate young people to be good, participating citizens.”

They also want to underscore to the children and readers how immigration has created a diverse and inclusive country.

To share their experiences, the couple is blogging their journey — even their dog Kipp — and keeping a video journal.

The trip is also being used as a fundraiser for the organization with the Ecksteins accepting pledges for their 3,500-mile trek via biking and walking events being held in their host cities so that the curriculum and message of how to be good citizens can be shared with even more of the next generation of Americans.