I’ve seen a number of stories about changing demographics and the rising numbers of Latino babies in locales all over the United States. Often they are contrasted with declining birth rates for non-Hispanics. But a recent story in the Tulsa World went a constructive step further to show how the demographic change is affecting policy and practice among the city’s Head Start programs. 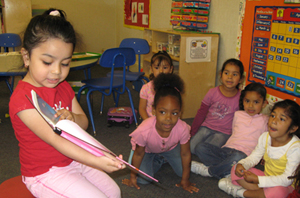 The story tells you that a nonprofit called Community Action Project, or CAP, runs Tulsa County’s Head Start program. What it doesn’t tell you–perhaps because Tulsans know it already–is that CAP is a national leader in early education. That status adds weight to their recent decision, noted in the story, to use dual-language English-Spanish instruction in all Tulsa County Head Start programs starting next fall. Over the past five years, Hispanic enrollment in the programs has risen from 30 to 40 percent of all students. Three years ago, CAP began issuing its Head Start materials in Spanish as well as English.

Though clearly the reporter’s goal in this story was to write about the changing demographics in Tulsa and across Oklahoma, I think it would have benefitted readers to have a little more explanation of what dual-language instruction will mean in Tulsa’s Head Start programs. Will there be designated times when children and teachers speak Spanish, then English? Will one teacher speak English and another–or an assistant?–speak Spanish with children? Methodology matters in making dual-language instruction successful. Being a geek for this sort of thing, I’d also really like to know how they are training teachers to do it and whether they’ve had trouble recruiting enough Spanish-speaking teachers.

In any event. there’s room for a follow-up story next fall when the teachers start using both languages regularly with the students. Hope the editors remember!