Latino children from low-income families face more than just academic struggles. As this story in the New York Times points out, they may also face health problems, which in turn, can contribute to lower school achievement. 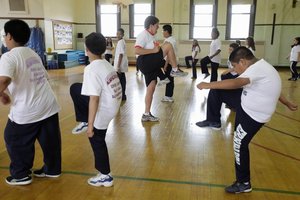 The story, produced by the Bay Citizen for the Times, examined state data of student performance in California’s statewide physical fitness test. It found that students from more affluent schools scored higher than students from low-income schools.

At the affluent Sycamore Valley Elementary, for example, 83 percent of fifth graders received healthy scores on six different measurements. However, at Cesar Chavez Elementary, where many students speak Spanish as their first language and more than 85 percent of students receive free or reduced-price school lunches, no fifth-graders received six healthy scores. About 25 percent received a “need improvement” score on every measure.

Differences between the schools may contribute to the inequity: Sycamore Elementary has “physical education specialist” who helps students train for the test. Cesar Chavez doesn’t. Sycamore does not allow cupcakes or other unhealthy treats for classroom celebrations, and fund-raising helps pay for movement classes and other fitness activities.

At Cesar Chavez, a fenced-in blacktop lot, where the basketball rims have no nets, serves as the setting for physical education classes. The school’s parents, many of whom are immigrants and some homeless, cannot afford to give money to the school.

Dr. Harold Goldstein, executive director of the California Center for Public Health Advocacy, a nonprofit organization, told the reporter: “It comes as no surprise whatsoever that such enormous inequities would be present. It is grossly unjust and will have health and economic impacts on the state of California for generations to come.”

The Bay Citizen investigation highlights an interesting, and under-reported, inequity between affluent and poor schools. With an undeniable correlation between health and school achievement, are students in lower-income schools at a disadvantage on tests and classroom performance because of a lack of adequate physical education programs?

Every state requires students to take physical fitness tests. Ask for the data from your state. Do less affluent schools score lower? If they are, what is making that difference?

Previous Post A Deportation Love Story
Next PostHispanics Have Been in Texas Since November 6, 1528

A Deportation Love Story
Comment
Hispanics Have Been in Texas Since November 6, 1528