LatinaLista — Whether it’s an e-reader or tablet computer, it’s difficult to find a reputable brand that is under $100. For too many Latino families whose children need to read books, the cost is enough to keep many Latino students from enjoying the tech-age of digital reading. 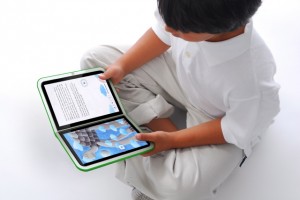 Couple that with the fact that too many mainstream published books don’t reflect Latinos, either in character or experience, and it adds up to another factor of why Latino children pale in literacy rates compared to their white peers.

Even if more Latino-authored stories were to  circulate, either through self-publishing, independent presses or mainstream publisher author-discovery programs, Latino families would still have to overcome the cost disparity in the technology, if they are to effectively interest their children in reading.

Some would argue that an old-fashioned spine book is good enough. In many cases, that’s true but according to a new study children are increasingly preferring to read their books the 21st Century way.

Most of these children are reading these e-books, not at school, but at home.

Though the majority of the children, ages 6-17, who were interviewed were Anglo, 23 percent were Latino. However, the majority of parents of these children were married and had an income of over $75,000 — again, not reflective of the family situation of the Latino children who have the greatest literacy needs.

But the report is important because it does illustrate the trend of children interested in reading e-books and where there is an interest there is high probability that educators and publishers will meet that interest with new e-books. It will be all the more reason for schools and publishers to ensure that low-income and low-income families of color aren’t left behind as this trend continues.

In the meantime, if all children had access to e-readers/e-books, the following findings from the study would have even greater significance: