LatinaLista
USA — Today is Halloween and since I have no children to talk about, I will tell you an anecdote of one of my friend’s daughter, Ashley.

Ashley was a tough cookie. She seldom took “no” for an answer. She argued anything and had plenty to say about everything. She was a born leader, and bossy at that.

She didn’t like to wait in lines, always took first turn, and would lose interest in anything she could not excel at. No one dared to bully Ashley, because she had no second thoughts or qualms about slapping or kicking. And if all else failed, she had a mom that would come quickly as back-up. 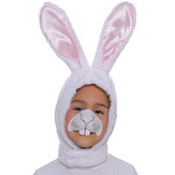 It was Halloween a few years ago in Atlanta and my home’s terrace faced the gardens of the apartment complex I lived-in. It was from there that I could hear Ashley and a batch of about 5 other boys and girls, all rounding 9 years old, arguing about Ashley’s costume that night to go trick-o’-treating.

It was all of them ganging up against Ashley. She wanted to be a bunny and the other kids were scolding her, telling her that she couldn’t be a bunny, that she had to dress up as something scary, something creepy; a ghost, a zombie, a witch, a werewolf, Dracula, Frankenstein, were some of the suggestions offered.

But Ashley stuck stubbornly to her decision of wearing the pink bunny outfit.

After a good 25 minutes of arguing, Ashley started to get upset, and she finally told all the kids off and stumped away crying whilst holding her arms crossed; leaving part the batch of kids defiantly giving her the “bird” with their fingers and the other part holding the first’s half’s hands down worried about the given chance that Ashley would turn around and start her relentless slapping and kicking.

Later that afternoon, I ran into Ashley, when I returned home from my shopping, and she looked relaxed and happy, not at all fretting about the Halloween costume she would wear that night.

My curiosity killing me, I neared her and asked what she had decided she would be that night.

Her response: “a dead bunny”.

Roxana Urrutia is a first-generation American, born to a Spanish mother and Chilean father.

She grew up between Spain and the United States, knowing what it was like to not speak English and being treated like an immigrant, and then returning to Spain only to be considered “la Americana.”

Since 1999 she has lived in Madrid and makes her living planning events and conferences.

I used to think that I didn’t fit in either country, now I realize they are both my home.

Previous Post Mexico: Understanding the Motivation to Migrate
Next PostIt's time to talk about it in our Latino community: Male Breast Cancer

Mexico: Understanding the Motivation to Migrate
Comment
It's time to talk about it in our Latino community: Male Breast Cancer