LatinaLista — Autism. When most people hear the word, images of children not making eye contact, flapping their hands, repeating words, overreacting to being touched, or hearing sounds, and being obsessive about certain things are among the actions, thanks to popular films, most people use to define autism. 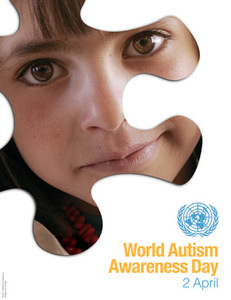 Whether greater public awareness about autism is due to the film industry, traditional media or social media campaigns, the fact is, according to the Centers for Disease Control (CDC), is that since the CDC’s first report on the condition in 2007 there has been a 78 percent increase in children identified with an autism spectrum disorder (ASD).

What’s troubling is that the CDC reports that the largest increase in ASD diagnosis is among Latino children — 110 percent.

While some would chalk the increase up to greater awareness because of the media campaigns, the researchers say heightened awareness can only count for a part of it. There’s something else that’s causing more Latino children to have autism.

Nobody really knows for sure what causes autism but the CDC has discovered a few common situations among children diagnosed with autism:

The CDC is working to discover the causes of autism through the largest study in the United States to help identify what might put children at risk for ASDs.

The Study to Explore Early Development (SEED) is being conducted by CDC’s Centers for Autism and Developmental Disabilities Research and Epidemiology and is studying potential risk factors that may be related to genes, health conditions and other events during the mother’s pregnancy and the child’s first few years of life.

So far, SEED has enrolled more than 3,700 children, and more than 2,200 children and their parents have completed the study.

But finding the cause of the medical condition is only half the battle. Educating the public about autistic children and adults is the other half of the battle and one that World Autism Awareness Day strives to accomplish.

The United Nations reports that the rate of autism in all regions of the world is high and with it comes a level of discrimination directed at autistic children and their families. To combat this discrimination, the UN General Assembly in 2008 adopted the resolution to make April 2, World Autism Awareness Day.

The UN wants to emphasize that people with autism are creative, talented and productive members of society. To showcase their talents, the UN Postal Administration will issue special Autism Awareness stamps created by artists with autism and available for sale to the public.