LatinaLista — When it comes to affording college, it’s just a fact of life that if it wasn’t for financial aid too many students would never realize their career dreams. Yet, a new study shows that the very students who need financial aid the most to attend college are not only being shortchanged but are carrying a larger financial burden. 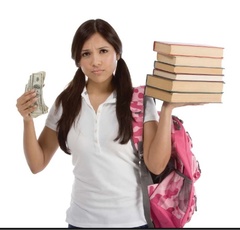 The study by The Education Trust, Priced Out: How the Wrong Financial-Aid Policies Hurt Low-Income Students, found that low-income students at 275 institutions are expected to pay more than 100 percent of their annual family income to attend college.

The study’s authors say that college tuition and fees have increased at four times the rate of inflation, outpacing even healthcare costs. Apply that to the fact that low-income families have actually seen their earnings decrease by seven percent over the last 30 years, it’s not an exaggeration to say that low-income families are having a harder time than middle-class and the wealthy at affording college for their children — even with financial aid.

After exhausting all sources of grant aid, the typical low-income student must come up with more than $11,000 a year to attend a public or private nonprofit college. Every year, this extraordinary financial burden requires low-income families to pay or borrow an amount equivalent to nearly three-quarters of their family income for just one child to attend a four-year college. In contrast, middle-class students must finance the equivalent of 27 percent of their family income to go to college, while high-income students must finance just 14 percent.

One of the more shocking discoveries of the report is that out of 1,186 four-year colleges

The study points out that none of the well-endowed public flagships, private nonprofits, or for-profit college companies are represented among the five.

To make college equally affordable — as of now, 82 percent of young people from the highest income quartile in America have a bachelor’s degree by age 24 versus only 8 percent of those from the lowest income quartile — the researchers say legislators have to go beyond cutting the cost of higher education and implementing policies that assure low-income students have the same chance at receiving full financial assistance:

But it’s not just about fairness, although you’d think that would be enough. The bias toward privilege encoded in today’s financial aid policies not only betrays our democratic principles, it also weakens our ability to reach our collective aspirations.