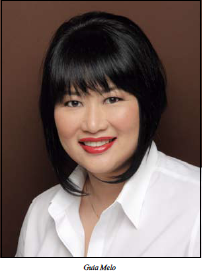 Melo traveled to Washington D.C. to receive the award. While in D.C., she met with U.S. Senator Daniel K. Akaka (D-HI), who introduced the National Foreign Language Coordination Act in 2005 and 2009.

She said she admired the senator’s efforts in promoting the creation of a national strategy to increase the number of Americans who are proficient in foreign languages, and that it was unfortunate the act was not signed into law.

When she was a little girl, Guia Melo was already called maestra thanks to her affinity to correct people. Becoming a teacher, however, was the last thing on Melo’s list of possible professions.

Melo attended the University of Hawaii at Manoa with great enthusiasm and little idea as to which major she would choose. She loved languages and had been drawn to Spanish during her childhood in the Philippines. But years earlier her mother thought studying Spanish was useless and encouraged her to study Japanese instead.

She decided to work on her core courses, while she figured out her major, and Japanese just didn’t work with her schedule. Melo looked at a lady in the Spanish department, who gave her a sweet and comforting smile, and signed up for Professor Linda Rudoy’s Spanish class.

“She was so kind and wonderful. It was because of her that I majored in Spanish,” said Melo.

After 26 years of teaching, Melo cannot see herself doing anything else. She is an inspiration to her students and colleagues. She works tirelessly to turn her ‘Iolani classroom, where she has taught for the last 22 years, into a portal to the different cultures of Spanish-speaking countries.

“My students are encouraged to respect and appreciate other cultures. I want them to see that along with differences, there are also many similarities, which bond us to people of different races or ethnicities,” said Melo.

She knows “there are different types of learners and different ways of motivating them.” So she uses both traditional and non-traditional methods to make the learning experience fun and informative.

Her students: participate in debates; discuss current events; produce brochures, newspapers and 15-minute newscasts; and use Skype to communicate with Spanish-speakers and students from other schools.

“When I first became her student, it was immediately evident that (Melo) has a sincere love for the Spanish language that she eagerly shares with her students,” said Shayne Janne Rasay in her AATSP Outstanding Teacher of the Year nomination letter.

Melo’s efforts and work to ensure students have the optimal language learning experience is not confined to her classroom and school.

“She was the driving force that brought the first ACTFL (American Council on the Teaching of Foreign Languages) National Language Teacher of the Year, Ken Stuart, to Hawaii for workshops that have benefited Spanish learners and teachers from around the state,” said Paul M. Chandler, president of the AATSP- Hawaii chapter, in his

“Most impressive is Melo’s willingness to assist and mentor other teachers and colleagues, both at ‘Iolani and other schools… She is there to lend a helping hand, whether it is to share lesson plans and pedagogical approaches, or to help organize an activity and bring more enthusiasm to an event. The saying, ‘a rising tide lifts all ships’ fits (her)”, said Doctor Val T. Iwashita, headmaster at ‘Iolani School, in his letter.

Melo has also served as vice-president and president of the AATSP-Hawaii chapter, and is currently the National Spanish Examinations (NSE) state coordinator.

In 2008, Melo spent her sabbatical in Colombia, Ecuador, and Peru. Photos, videos, and interviews of the landscapes and people she came across with during her trip captured

their beauty, warmth, and diversity. They made an impact. A group of nearly 80 students, parents, friends and colleagues joined her on a trip to Peru and the Amazon in 2010.

Melo said she is a life-long learner, and known as a well-organized and strict teacher.

“I like to challenge my students by setting high, but attainable, goals in order to inspire confidence in them,” said Melo.

Despite all her achievements, her greatest reward as a teacher is seeing the growth and success of her students. Several of them have received the Bertie Green Travel Award and other scholarships.

“(Her students’) Advanced Placement scores and test results on the NSE are exceptional, especially for students learning in a locale as isolated as ours and one that does not have many Spanish-speaking people visiting, living, or working here,” said Dr. Iwashita.

“Teaching is challenging, especially when one has to constantly be creative in order to hold the students’ attention. But it gives me a lot of satisfaction knowing I have helped culturally-diverse students communicate in Spanish, and appreciate – not only their own – but other cultures as well. They also learn that together we grow emotionally, socially, and intellectually,” said Melo.