It doesn’t pay for teachers to teach Latino and black children — literally!

LatinaLista — It just doesn’t pay for teachers to teach Latino or black children — literally! A report issued last month from the Department of Education highlighted the fact that teachers at schools with more Latino and African American students were paid $2,500 less on average than teachers in the district as a whole. 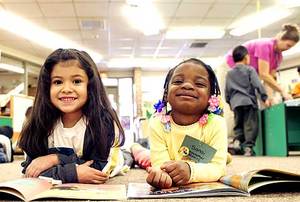 The report is part of the 2009-2010 Civil Rights Data Collection (CRDC). The disparity in teacher pay clearly underscores the systemic presence of racism within our educational system.

Since most urban school districts now have a majority of students of color, the findings of this report should have raised a lot more red flags when it was initially released because it implies a number of things:

School districts are failing children of color by paying their teachers less which, in turn, compels these teachers to want to move to schools where the pay is higher. That translates into less consistency in faculty and frequent turnovers.

Less pay translates into less motivation for teachers to do their best to teach children already considered at-risk.

And if teachers are paid less, it makes sense that the school district is also spending less on equipment, maintenance and anything extra that enhances the learning environment for children.

Russlynn Ali, assistant secretary for civil rights, said that the teacher pay data, along with other new categories included in the Civil Rights Data Collection, which will be released in full later this year, are a valuable tool.

“To repair our education system requires that we be able to identify where problems exist,” Ali said. “Collecting these data and making them widely accessible is a powerful way to make the case for action.”