Latina Lista: News from the Latinx perspective > Life Issues > Education > Latino and Black male students at the mercy of a segregated and suspension-focused school system

LatinaLista — Though pundits, mainstream media and the political parties themselves have been obsessed over the push-and-pull direction of the Latino vote in this presidential election, one of the real issues that matters is being ignored — kinda. 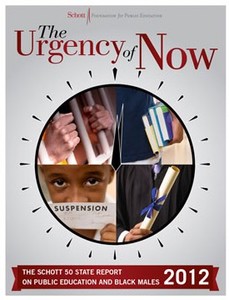 The issue is the future of the Latino community and the nation. Not as it relates to today’s job situation or the economy or even healthcare, but education. The Schott Foundation for Public Education released today a new report, According to The Urgency of Now: The Schott 50 State Report on Public Education and Black Males, that finds less than 60 percent of Black (52 percent) and Latino (58 percent) male ninth-graders graduate from high school four years later.

Those numbers are alarming when compared to the graduation rate of White, non-Latino male ninth-graders which stand at 78 percent.

“We have a responsibility to provide future generations of Americans with the education and the skills needed to thrive in communities, the job market and the global economy. Yet, too many Black and Latino young boys and men are being pushed out and locked out of the U.S. education system or find themselves unable to compete in a 21st Century economy upon graduating,” said John H. Jackson, president and CEO of the Schott Foundation for Public Education. “These graduation rates are not indicative of a character flaw in the young men, but rather evidence of an unconscionable level of willful neglect, unequal resource allocation by federal, state and local entities and the indifference of too many elected and community leaders. It’s time for a support-based reform movement.”

The basic difference in graduation rates can be due to the fact that more Latino and Black male high school students are suspended from school at higher rates than their White peers. Removed from the school campuses and placed in alternative school settings for extended periods of time leaves these students with the impression that educators don’t care about them. In the end, they ask themselves why they should care about education.

Another report released today that echoes the same sentiment finds that Latino and Black students are experiencing one of the most segregated educational systems of all times.

…segregation has increased seriously across the country for Latino students, who are attending more intensely segregated and impoverished schools than they have for generations. The segregation increases have been the most dramatic in the West. The typical Latino student in the region attends a school where less than a quarter of their classmates are white; nearly two-thirds are other Latinos; and two-thirds are poor. California, New York and Texas, all states that have been profoundly altered by immigration trends over the last half-century, are among the most segregated states for Latino students along multiple dimensions.

The Civil Rights Project report’s findings of deepening segregation may explain why graduation rates are so low for Latino and Black students.

The consensus of nearly sixty years of social science research on the harms of school segregation is clear: separate remains extremely unequal. Schools of concentrated poverty and segregated minority schools are strongly related to an array of factors that limit educational opportunities and outcomes. These include less experienced and less qualified teachers, high levels of teacher turnover, less successful peer groups and inadequate facilities and learning materials. There is also a mounting body of evidence indicating that desegregated schools are linked to important benefits for all children, including prejudice reduction, heightened civic engagement, more complex thinking and better learning outcomes in general.

One interesting takeaway from the Schott Foundation report was that in those schools in states that had very few Black males enrolled in their state schools, the Black students graduated at much higher rates. The thought behind the success was because these students weren’t confined to a school that was substandard, showing that a Black student given the same opportunities and school environment as their (White) peers could do as equally well, if not better.

Logic would dictate that the same would be true for Latino students.

The time to reform education, upgrade buildings and school resources has never been as imperative as it is today. It’s an issue that deserves both candidates’ full attention and not a backhanded acknowledgement. Without the proper investment today, these same students will comprise the so-called 47 percent of Americans tomorrow who will need the safety net programs derided by conservatives, not because they feel entitled but because they want to survive.