The forum, which took place at the Jacobs Center on Saturday, May 14, highlighted several key academic areas where Latino students are lacking the same opportunities than other ethnic groups, although Latinos make up more than 50 percent of the total student population in San Diego City Schools.

“The education gap for our children is widening: It is not getting better,” said former State Senator Gloria Romero, who currently serves as State Director of the Democrats for Education Reform. “Many of our children are trapped in underperforming schools. We´re far behind.” 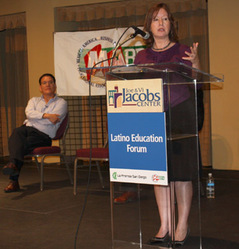 Romero was at the forum to encourage Latino parents to get more involved in their children’s education, and to make their voices be heard to create positive change in the schools.

“Listen to the statistics. Make a commitment as a parent that you’re going to be active,” she said during her speech.

Gloria Romero speaks on the disparity in education.

The forum, which was sponsored by La Prensa San Diego and the Mexican-American Business and Professional Association (MABPA), was attended by about 200 people, including parents, and students.

“You being here tells me that you’re a leader in your community, in your school,” Dan Muñoz, editor of La Prensa San Diego, told the crowd.

The main goal of the forum was “to openly and candidly discuss the Latino condition in San Diego Unified,” organizers said in a statement.

Dr. Alberto Ochoa, a long-time Latino educational leader and a professor at San Diego State University, said that San Diego schools are more segregated now than in the past.

“There are significant differences in terms of quality for different groups of students,” said Ochoa, who is on the school district superintendent’s Latino advisory committee. “Most our children are English-language learners and they do not receive effective instruction.”