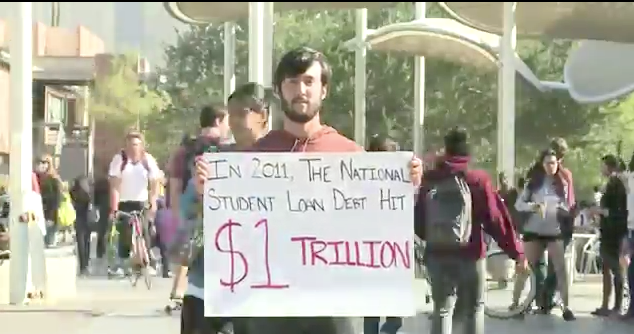 LatinaLista — The findings from the latest GALLUP poll reveals that most employed Americans (57%) say the work they do doesn’t require a college degree.

It’s a question that haunts many college students sinking deeper into student debt these days as they weigh the value of a college education. Three particular students: Alex, Tara and Jake, from Arizona State University (ASU) decided to take a closer look at the issue.

These students who, like many of their peers, are facing their fair share of student debt upon graduation, were in a unique position to put that GALLUP poll finding to a test — the three aspiring journalists made a documentary exploring the issue.

increasing costs of tuition; deteriorating quality of higher education; diminishing value of a college degree in the job market; student dependence on state and federal financial assistance; and the effects on personal lives and aspirations.

While the 26-minute film is focused primarily on Arizona, it’s a national issue that students everywhere are having to face as they begin a new school year and findings from the latest GALLUP poll showing that most employed Americans (57%) say the work they do doesn’t require a college degree.

The three young filmmakers document the lives of three ASU students who want their college degrees but are facing hardships due to the costs.

In addition to student voices, the film also includes the perspectives of an Arizona state legislator, the ASU vice provost of enrollment and the co-founder of “Student Debt Crisis and Occupy Colleges.”