Latinos have the lowest attainment level of any group in the US; only about half of all Latino students earn their high school diploma on time. Those who do complete high school are only half as likely as their peers to be prepared for college. Just 13 percent of Latinos have a bachelor’s degree, and only 4 percent have completed graduate or professional degree programs. And the list goes on. 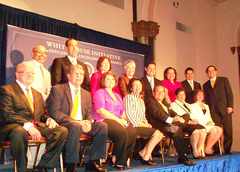 It’s clear that there is much to be done to break the obstacles Latinos face to meet education success. The question is how do we get there, and get there fast?

President Obama has challenged America to once again lead the world in the share of our population with a college degree by 2020.

How will Latino reach this goal and move beyond statistics and reports towards action?
The hope is that through efforts such as the White House Initiative on Educational Excellence for Hispanics, which was established in September 1990 to advise the President and the Secretary of Education on issues related to Hispanics and to address academic excellence and opportunities for the Hispanic community.

To push this agenda, President Obama announced yesterday fifteen new members to the commission. They include recognized Hispanic leaders from the education, philanthropic, business, nonprofit and high-tech sectors such as Cesar Conde, president of Univision; Patricia Gandara, education professor at the Graduate School of Education and Information Studies at the University of California; Maria Neira, vice president of New York State United Teachers; Marta Tienda, professor at Princeton University and others.

The appointments met for a two-day inaugural meeting open to some community leaders from across the nation and was webcast live. Some of the discussion points included challenges and opportunities ahead; how to create public and private partnerships as well as with parents, teachers, community and students; and how to strengthen the educational system.

These goals are part of the Winning the Future report which outlines the President’s agenda to improve education for the Latino Community. The recurrent message throughout has been the future of Latinos is tied to the future of the country.

Latino leaders are hopeful that this effort is a step in the right direction.

“I think the White House initiative on Education Excellence for Hispanics is an important step in addressing the inequities that currently exist in this country in public education,” said Cesar Moreno, senior associate of Human Rights and Community Relations Department at the American Federation of Teachers, AFL-CIO. “Poverty has a face, poverty has a name and unfortunately the Latino students are impacted by that but it is through education that we address poverty.”

Along with the White House Initiative on Education Excellence for Hispanics, the community-at-large will be asked to play a role.

“If you know someone who has a child or yourself has a child in the school system, they have to make sure they have the basic information to get the best out of their child’s education,” said Commission Member, Lisette Nieves. “We also need to build credible ladders for Latinos who have already navigated the system to talk to those who have yet to do that,” Nieves added. 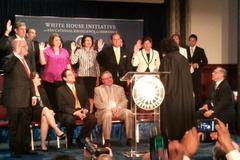 “I am here today because I had a mother who had a dream. She worked hard to give us the best education,” said Justice Sotomayor. “You are raising a lot of little Sonias. I want the little Sonias to dream about being President,” she added referring to the commission’s work.

To broaden its message, The White House Initiative on Educational Excellence for Hispanics carried the conversation to social media with a Twitter Party (live conversation) hosted by Latinos in Social Media also known as LATISM, the largest organization of Hispanic professionals engaged in social media, which helped magnify the commission’s agenda and engage more community members.

The next commission meeting will take place in September.

Cheryl Aguilar is a Washington DC-based contributor for Latina Lista.

Previous Post A lesson that turns into a gift for a young daughter from her migrant father
Next PostSpotlight Nonprofit: Teaching parents how to "book cuddle" with their children

A lesson that turns into a gift for a young daughter from her migrant father
1 Comment
Spotlight Nonprofit: Teaching parents how to "book cuddle" with their children