LatinaLista — If ever there was doubt of whether or not college/vocational training is worth the expense, here comes the latest in what seems like an avalanche of reports detailing just how imperative higher education/training is for today’s worker. 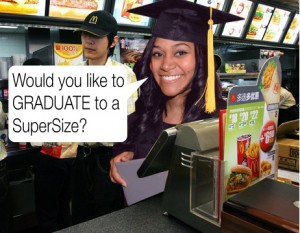 The latest report zeroes in on workers in California, yet the report’s authors are quick to point out that what’s happening in California is happening across the country. Fragmented Economy, Stratified Society, and the Shattered Dream, published by UCLA’s Civil Rights Project, finds:

…from the northern suburbs of Los Angeles County, through the metropolitan complex along the northern border of Baja California, is a diverse area containing 24 million people, with a disproportionate percentage of Latinos and African Americans who are facing an educational and economic disaster.

What makes this report different from the usual gloomy jobs report of Latinos and African Americans is that these researchers didn’t just look at unemployment, they looked at underemployment too. When both are taken into account, it doesn’t leave a lot of room for hope.

The report details how the gap in inflation-adjusted income has been more severe in California than in the U.S. as a whole.

Since 1979, high-wage California workers reported earnings that were substantially higher than their counterparts across the nation. However, while middle wageworkers have barely kept pace with inflation, California workers on the lowest end of the wage distribution scale have lost purchasing power as their inflation-adjusted wages have dramatically declined since 1979.

The findings are equivalent to the canary in the coal mine where what’s happening to the low-income in California will be repeated, if not already, in the near future across already disenfranchised communities in the country.

Some predictors of this trend include: