LatinaLista — These days, many Latino college students and their families are wondering if a college degree is worth all the dinero. 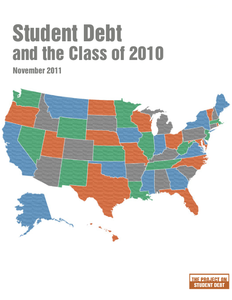 The short answer is — Yes!

Looking at the breakdown of the unemployed, the website, Department of Numbers, shows that those with a Bachelor’s degree or higher have the lowest rates of unemployment. In fact, the more college education a person has, even if they didn’t graduate, the better their odds at having a job are.

Yet, the cost of getting that education is still high. A new report released today by The Project on Student Debt, Student Debt and the Class of 2010, found that most 2010 college graduates, who received loans and financial aid, started their careers carrying an average debt load of $25,250.

The report breaks the nation down state by state showing average college debt for each state. Yet, in a refreshingly bold move, the report calls out those colleges that are high debt colleges:

High Debt Private Nonprofit Colleges and Universities (just a few of the 20 listed):

High Debt Public Colleges and Universities (just a few of the 20 listed):

The report listed 20 low debt colleges — a mix of private and public.

The colleges on the list are notable for having low debt levels for the Class of 2010, with reported average debt between $950 and $8,700.

Some of these colleges are low-tuition public colleges, but a few have tuition and fees over $10,000. Some are highly selective national universities and liberal arts colleges with fairly large endowments, which tend to enroll fewer students who need loans to pay for college and often give generous grant aid to lower income students.

Berea College and the College of the Ozarks are “work colleges,” where all students work instead of paying tuition. However, students at these colleges may still need to borrow to cover the rest of the cost of attendance.

Some of the low debt colleges are:

The prospect of paying for schooling years after receiving the degree doesn’t appeal to anyone but knowing that the prospect of finding a job may be easier, and that it will pay a livable wage, makes it a risk well worth taking.