LatinaLista — The debate over whether or not a child is better off learning in a bilingual environment has raged before the time when American educators forced thousands of Native American school children into English-speaking boarding schools or punished Mexican-American children for speaking Spanish in school. 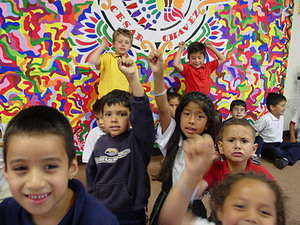 However, the general consensus these days is that it’s an asset for children to learn in a bilingual environment. According to a new study, it’s especially true for Mexican American children whose first language is Spanish.

David Aguayo, a doctoral student in the College of Education at the University of Missouri, found in his study “Culture Predicts Mexican-Americans’ College Self-Efficacy and College Performance,” that Mexican-American students who spoke in their native languages had higher grade point averages.

“It’s a simple correlation, but living and learning within your cultural heritage is a benefit,” Aguayo is quoted in a press release. “It could be speaking the language in school, eating certain foods, or interacting with other people who share your heritage. The stress level of being in a new culture will decrease if these students have a support system in school, while they are adjusting to other cultures.”

This would seem to be true for any student of another culture thrust into a foreign educational system. The fact that Mexican American students outnumber other foreign-born students in the public school system affords an opportunity that lends itself easily for study.

However, this study seems like a no-brainer. After all, what foreign-born student wouldn’t do well with a curriculum and support system that not just valued their native language but cultural heritage?

Everybody has an idea but nobody knows exactly for sure why it’s the case. It’s a study that could shed some much needed light on an issue that is already in crisis.