Dr. Alicia Abella works tirelessly to interest the next generation of Latino students in STEM (Science, Technology, Engineering and Math) careers and create a new future for themselves.
Exposing students to role models is essential to encouraging and inspiring them, particularly to join fields not considered traditional or “cool.”

Math and science are two such fields and are not necessarily the most popular subjects among young students. But one of the country’s top Latina scientists is working relentlessly to change this. 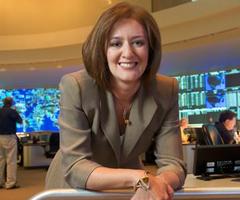 Recently appointed to the Presidential Advisory Commission on Educational Excellence for Hispanics, Dr. Alicia Abella is a passionate advocate of STEM(Science, Technology, Engineering and Math) careers, and she is committed to changing the status quo for women and minorities in this field.

It was during her junior year in high school that Dr. Abella heard that someday everyone would own a computer. This triggered Dr. Abella’s curiosity about what a world with computers would look like in the future.

When the report she heard started to turn into reality and computers became more and more popular, she knew that someday she was going to be a part of the growing technology movement.

With the boom in computers, Dr. Abella understood there were going to be opportunities in jobs related to this explosion and she was determined to help advance them.

Just like she predicted at a young age, STEM (Science, Technology, Engineering and Math) careers have grown three times faster during the last decade, according to a Commerce Department study. Although jobs have expanded, women and minorities are still underrepresented in the fields of science, technology, engineering and math.

Dr. Abella feels there’s no time to lose for women and minorities to enter STEM fields. STEM occupations are projected to grow by 17.0 percent from 2008 to 2018, compared to 9.8 percent growth for non-STEM occupations. STEM jobs pay an average of 26 percent more than other occupations.

Yet, even with the promise of a higher salary, the biggest challenge for Dr. Abella is how to get students to see that far into the future and envision themselves in those jobs.

For this relentless Latina, it takes a lot of traveling from city to city across the country to speak, educate and inspire people across generations (students, parents and educators) about STEM careers.

Dr. Abella believes that to increase the number of students in the STEM fields everyone in the community can play a role — parents, educators, and community members.

“(Interest in these fields) starts at a very young age. By the time you get to college, it is too late,” she said at a congressional briefing. “This country needs a change of attitude towards science,” she added.

Dr. Abella encourages more parental engagement and education to put aside the fear some parents may have around college costs.

“It is an investment. There are fellowships, scholarships,” she said. She believes that teachers should also educate students about the value of STEM careers and professionals in these fields should mentor young students.

It takes a lot of perseverance to break through a field not traditionally thought of for women and minorities as Dr. Alicia Abella has done. To enter a Ph.D. program at Columbia University in Computer Science, Dr. Abella had to take pre-requisite exams.

She studied hard for each but even after all the hard work, there was one exam she couldn’t conquer.

After 3 failed attempts, she still didn’t give up. She found the determination to try it one more time. The last time paid off. She passed the exam.

Today, Dr. Abella is working alongside the very creator of that infamous exam at AT&T. It’s an ironic twist of destiny that she shares often in her many speeches to university students.

“You never know who you are going to touch,” said Dr. Abella. The last time she shared this story, she received an e-mail afterwards with a moving message from an aspiring nurse who wanted to give up on her career track. Instead, the young woman thanked her for inspiring her to keep moving forward.

A forward direction is what has taken Dr. Abella from an internship at AT&T to her current position as executive director of the Innovative Services Research Department.

“Dr. Abella not only personifies the American Dream, she has dedicated herself and worked tirelessly to ensuring young Latinos and Latinas understand that nothing is out of reach for them,” said Ralph de la Vega, President and CEO of AT&T Mobility and Consumer Markets.

“Dr. Abella’s work, both at the AT&T Labs, as well as her passion and vision of attracting more Latinos to STEM careers, will no doubt help keep this great country number one in competitiveness and second to none in opportunity for all. I am incredibly proud of Dr. Abella’s work, and I know that with her unstoppable drive towards excellence, she not only is an inspiration to young Latinos and Latinas everywhere, she is an inspiration to us all here at AT&T.”

For her contributions in STEM, Dr. Abella has received scores of accolades. Last year, she received recognition from Great Minds in STEM (TM) for contributing to America’s Science, Technology, Engineering, and Math heritage; she was named Hispanic Business Magazine’s Top Five Women of the Year and received the 2010 Latinos in Information Sciences and Technology Association Leadership of the Year Award.

In 2009, she was recognized by the Congressional Hispanic Caucus Institute for her contributions in the area of green technology. In 2008, she became a member of the elite group of AT&T Science and Technology Medal award winners.

Yet, even in light of her many awards, Dr. Abella remains focused on enlightening more students about STEM careers. In addition to raising awareness through her speaking engagements, she serves as executive vice president of the Young Science Achievers program — a program that mentors and promotes scientific achievement for high school-aged women and minority students.

She continues her dedication to young people with the AT&T Labs Fellowship program where she encourages, advises and evaluates candidates for a prestigious graduate scholarship from AT&T targeted at women and minorities — and the next generation of scientists, engineers, mathematicians and technologists.

Cheryl Aguilar is a Washington DC-based contributor for Latina Lista.