LatinaLista — A New York Times article points out that in the rush to bridge the digital divide — giving low-income families access to computers and other high-tech tools to access online resources — it has created an unintended consequence, the “time-wasting gap.” 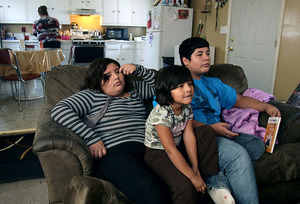 As access to devices has spread, children in poorer families are spending considerably more time than children from more well-off families using their television and gadgets to watch shows and videos, play games and connect on social networking sites, studies show.

The article’s author says that policymakers and researchers say the reason for this growing “time-wasting gap” is because parents with limited education don’t know how to limit and monitor their children’s use of technology.

In fact, the Federal Communications Commission is so concerned that they are considering spending $200 million to create a digital literacy corps. The corps would be comprised of thousands of trainers who would go out to schools and libraries to teach “productive uses of computers for parents, students and job seekers.”

While there’s truth to the fact that parents do need to set limits and monitor their children’s use of technology, it’s also true that assuming these children are wasting their time is wrong. There’s a reason why children of affluent families, or families who have discretionary funds left over from a paycheck, spend less time interacting with handy tech devices.

It boils down to money.

Families with extra money can pay to enroll their kids in organized activities that keep them busy, and out of the house. Families who are cash-strapped and for whom having their kids stay indoors is preferable to being outside subjected to increasingly hot temperatures, air pollution, neighborhood trouble-makers or limited play equipment would much rather opt that their children do something constructive like being online.

For Latinos, socializing online is a constructive activity. How soon we forget that it was because of that social networking online that a young Latino teen in Dallas was able to organize one of the biggest immigrant marches in the country and the city of Dallas.

And who is to say that online gaming is a waste of time? It’s role playing. These games allow players to step outside of their environment and experience something different. The games contain important lessons as well, believe it or not, like teaching players how to stay on task, persevere to the finish, be observant, analyze surroundings, react, etc.

Instead of spending $200 million to “teach” people all that can be done with the computer, the money would be better spent understanding the Latino culture and how families, who have historically been low-income, compensate for that lack of money by using the devices at their disposal to create their own entertainment.

If policymakers and researchers were really concerned, they would use that money as seed money to finance new games, apps and web sites that not only satisfy the entertainment needs of low-income families but also feature elements of the kinds of knowledge, skills and training that tomorrow’s workforce will need to know.

The first web site that could be financed would be one that would teach everything a digital literacy corp member would teach out in the field. Instead of spending money to send out someone, the web site could be accessed by a teacher or volunteer on site who could walk people through the information, administer a simple test after it’s done and award a certificate of completion.

It is important to know how to maximize the benefits of technology but it’s wrong for one group to assume that another is just “time-wasting” because they don’t use it in the same way.