LatinaLista — Watching the fiasco unfold between the Susan G. Komen Foundation and Planned Parenthood, two organizations that each have been a friend to the Latino community, reminds me of the old adage about three things one should never discuss in order to keep peace in a family — religion, sex or politics. 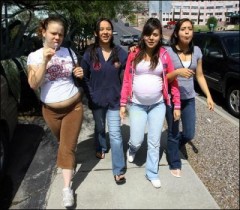 The Komen and Planned Parenthood dispute was all about sex and politics because of the issue of abortion. Now, Gov. Romney has weighed in on the battle and joined his fellow nominees by taking it a step further to attack the White House on the issue of contraception.

Romney took aim at recent regulations requiring women’s contraceptive services to be covered by insurance policies under the Affordable Care Act. The Catholic Church had sought a broad exemption for the many Catholic institutions in the country to recognize its canonical opposition to artificial birth control. Instead, the Department of Health and Human Services excluded only religious employers that primarily employ members of their own faith communities.

Any discussion that features religion, sex and politics is bound to bring division rather than unity. Yet, there is one issue where the three arguments converge seamlessly and pathetically — teenage pregnancy.

Because of religion, sex and politics, Latina teens still have the dubious distinction of having more “baby mamas” walking school hallways. Though the National Campaign to Prevent Teen and Unplanned Pregnancy’s Latino Initiative reports that the birth rate for Latina teens is at its lowest on record, unfortunately, both “Latino teen birth and pregnancy rates are almost twice the national average and have declined only half as fast as national rates.”

It’s always been easy to blame the kids and the parents, and they do share the blame, but as more and more research is done, common sense is emerging that there are outside influences that play just as big a role as parents and self-responsiblity.

For example, religion. Whether it is Catholicism, Baptist, Evangelicalism or Muslim, each religion upholds the sanctity of life so high that contraception is either considered a sin or strongly discouraged. Teens who respected their religions, or the religions of their parents, would feel more guilty about using contraception to prevent an unwanted pregnancy rather than having illicit sex. That is, if they knew about contraception.

Sexuality education has been a hit and miss among school districts and states for as long as abstinence-only curriculum has been around. Most educators, parents and even students realize that the only way students can make informed choices about having responsible sex is to know the facts.

Some school districts are willing to teach medically accurate sexuality education in their schools but there are far too many that don’t. It’s resulted in kids getting half-truths and misleading information about a very important topic. The disparity has been so great, as the Latina teen pregnancy rates revealed, that last month the National Sexuality Education Standards: Core Content and Skills, K-12 was released.

The document sets national core standards for school districts to be consistent across the country in what children learn about sexuality education.

The goal is to keep children from having children, but when politics is interjected in the discussion, the message gets even cloudier.

A new study by researchers from Washington University in St. Louis found that “states with higher religiosity rankings and greater political conservatism had higher adolescent birthrates.”

“State adolescent births vary widely, and these disparities across states should be acknowledged as a major public health concern,” Cavazos-Rehg told LiveScience. She noted the difference in birthrates among girls ages 15 to 17 in Arkansas and New Hampshire. Arkansas, with high conservatism, had the highest birthrate in this study, 34.8 per 1,000 girls in this age range. New Hampshire, with high liberalism, had the lowest birthrate, 9.7.

If ever there was an argument that sex, religion and politics don’t mix when it comes to female sexual health, it’s in the numbers of young Latinas, and others, who are having babies before they finish school, before they understand what it means to be a parent, before they’re financially and emotionally ready — and before they can even vote.