LatinaLista — There is a lot more on the horizon that can drag down the economy of the United States than last week’s S&P downgrade. 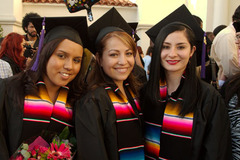 Namely, it will be the thousands of Latino students who have failed and continue to fail to graduate from college or even make it out of high school with a diploma.

This lack of higher education among Latino youth translates into a future economy that is less able to keep up with global competitors, has enough highly paid workers to provide enough money for federal coffers that support basic entitlement programs like Medicare, Medicaid, WIC and Social Security — programs used by the majority of Latinos — and will be reflective of a society where major growth is in an under-educated and low-skilled underclass.

It’s a serious problem and one that is garnering the attention of the National Conference of State Legislatures (NCSL).

Investing in Higher Education for Latinos: Trends in Latino College Access and Success offers an overview of the achievement gaps in each state and highlights the areas that could be targeted to improve Latino student success. This brief also provides state-by-state demographic and education-related data.

Investing in Higher Education for Latinos: Payoffs for State Economies focuses on how improving college completion rates for Latino students can be a catalyst for strengthening economies. An interactive map depicts where the Latino population grew the fastest in the past decade–primarily in the South and in the East. The map also provides a snapshot of the 50 states in terms of job forecasts, workforce profiles and education levels.

Each brief serves as a wake-up call to states that instead of passing legislation to deny Latino immigrant youths in their states the opportunity to pay in-state tuition, it’s time these same state legislators looked ahead at what will happen to their economies if their Latino population is under-educated and unable to fulfill the jobs that will make that state’s economy strong and viable.

The key to their’s and the nation’s future financial stability rests with an educated Latino workforce — and legislators who understand that reality.