LatinaLista — The 2012-2013 school year is barely underway and two separate and disturbing analyses of the nation’s public education system released today underscore that the continuing challenge facing students of color in their quest for academic success lies outside student control. 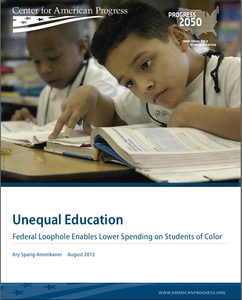 For the first time, data is available showing what schools are spending on students and on teacher salaries. Two areas that not only impact educational outcomes for students on campus but can distort the true state of a school’s effectiveness in providing the necessary services to their students.

Almost 40 percent of Latino and black children attend schools where more than 90 percent of students are nonwhite. In other words, public schools still remain segregated. This segregation is reflected in the title of the new report Unequal Education:
Federal Loophole Enables Lower Spending on Students of Color, published by the Center for American Progress.

The report’s author discovered some unsettling facts that help explain why schools whose student bodies are comprised mainly with students of color fare so much worse than white-dominant schools in the same district:

Schools with 90 percent or more students of color spend a full $733 less per student per year than schools with 90 percent or more white students. What does that add up to? On average, the high-minority schools have 605 students. This average school would see an annual increase of $443,000 in state and local spending if it were brought up to the same per-pupil spending level as those schools with very few nonwhite students. This is enough to pay the average salary for 12 additional first-year teachers or nine veteran teachers.

Having more teachers on campus would relieve over-crowded classrooms, more opportunity for students to get one-on-one attention from teachers and create a more conducive environment for learning. If more money was spent on students of color, it would allow for not only upgrading the maintenance of these schools servicing a predominantly student-of-color population but enable more textbooks to be bought, more technology to be used and truly help level the playing field between schools and school districts in creating a more equitable educational experience for all students of any district or state.

Yet, as the second report released today shows, unless educators are given the proper resources to help students-of-color academically achieve, they will always be behind.

The ACT released the report, Condition of College & Career Readiness 2012 and highlighted a disturbing find: 60 percent of 2012 high school graduates are at risk of not succeeding in college or being ready for their careers.

And who are the 60 percent?

College readiness levels remain particularly low among African American and Hispanic students. None of the four ACT College Readiness Benchmarks were met by more than half of students in those racial/ethnic groups.

Both the ACT and Center for American Progress reports are in direct contrast to what is known about the aspirations of Latino students — they want to succeed in school and they want to go to college. A recent Pew report detailed how Latinos are now the largest minority group on the nation’s college campuses.

From the two reports featured in this post, we know that the students who are starting college this school year worked against the odds to get where they are. Unfortunately, given the ACT report, their struggle to stay in college is only just beginning and will boil down to a simple case of ganas — how much they want an education because so far the system has done everything in its power to discourage them.