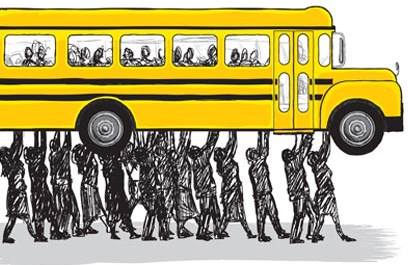 LatinaLista — Public schools and public school educators have been under attack a lot in the last few years. Politicians, “education reformists” and even some parents and media have indulged in playing the blame game — blaming public schools for children not learning, for “bad” teachers, for zero tolerance policies, for sending too many children of color to detention and alternative schools, etc.

While there is certainly truth in the preceding examples, no one seems to remember the good side of public education or educators until tragedy hits, either at the hands of Mother Nature or manmade. And then those realizations, and gratitudes, last only 2-3 news cycles at the most.

Jim and Dawn O’Keeffe of Pasadena, California want to change that. Parents of public school students, the couple were frustrated when a bill to fund their public schools was soundly defeated by local voters. When voters were polled after the election as to why they voted against giving money to the schools, most everyone cited the negative stories they heard about the schools.

The O’Keefes wanted to change that negative public perception. So, they came up with an idea — show people what actually goes on in their local public schools throughout the course of one day.

Go Public: A Day in the Life of an American School District is a documentary in which 50 small-camera crews followed a diverse group of people who have a connection to the Pasadena Unified School District, a racially and economically diverse district of 28 public school campuses.

This film tells the story of public school at the moment things are happening. No voice-over narrative and no expert commentaries. By filming over one complete day, we had access to the struggles and resolutions that often occur many times in an average day. Through personal stories, GO PUBLIC is a film that articulates the experiences of navigating a typical day in public school.

Fifty separate videos were edited together to form the documentary but each of the 50 was cut to be a standalone film.

This project is important now because too much focus has been placed on what is supposedly broken in public school education. There is room for improvement, but our cameras captured the many good things that go on every day in our public schools, the teamwork it takes and the textured richness for those involved. By telling the stories of individuals that work and participate in the schools, we encourage viewers to become informed and compassionate advocates for their community public schools ~ GoPublicProject.org