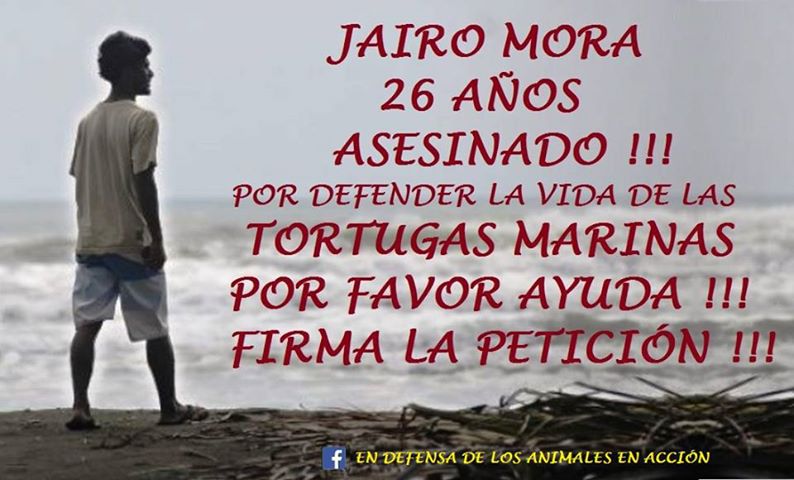 “They brutally murdered our companion Jairo, but, in honor of his fight, we will sprout ten Jairos more,” read the flyer at a peace vigil for Jairo Mora Sandoval.

Jairo was born in 1987 in the Caribbean coastal town of Limón, Costa Rica. He was interested in sea turtles from a young age, and by his twenties was studying biology and volunteering his time protecting sea turtles from poachers and drug traffickers on Costa Rica’s otherwise tranquil beaches.

In the early morning hours of May 31, 2013, Jairo was ambushed, bound, and brutally murdered while patrolling a sea turtle nesting beach in Moin, Costa Rica. His killers have not been caught, though chances are good that Jairo knew his assassins.

Jairo was terrified, but out-spoken about poachers and drug smugglers on the beaches he patrolled. In April, he went on-record with La Nacion, revealing his fear of violent criminals on the beach, but he showed no signs of relenting.

Poachers and traffickers target these beaches because sea turtles love to lay their eggs on their dark sands. Sea turtle eggs are believed by some to be an aphrodisiac, and sell for about $1 per egg. The connection between drug traffickers and poachers is well known, with traffickers using the cover of darkness to traffic, and accepting the valuable eggs as payment.

This was not Jairo’s first exposure to the senseless violence associated with poachers and traffickers. In 2012, thugs armed with assault rifles and hand guns broke into a protected sea turtle nursery, tied up and gagged the volunteers, and smashed or stole 1,250 sea turtle eggs. Jairo was the first to discover the volunteers after the attack. Earlier this year, he was personally threatened with violence and told to stop patrolling the beach.

Sadly, violence in Costa Rica over environmental issues is nothing new, and Costa Rica’s Marine Turtle Population Law of 2002 which mandates a three year prison sentence to anyone who “kills, hunts, captures, decapitates, or disturbs marine turtles,” seems to have had little deterring effect.

The only thing that will protect conservationists against future horrific crimes in this area is a loud international call for justice. Costa Rican officials need to take this tragedy seriously, and international partners need to provide support.

Write a letter to the President of Costa Rica, Laura Chinchilla, and the U.S. Ambassador to Costa Rica, Anne Andrew, demanding immediate action to capture and convict Jairo’s killers and to designate the sea turtle nesting beaches protected area to help thwart poachers and other criminals.

Anyone with information on the crime can contact PorJairoMoraSandoval@gmail.com or +(506) 236-0947.

Donate to the Jairo Mora Sandoval Memorial Fund which will go toward supporting his family and conservation project in his memory.

Contribute to the Jairo Reward Fund to provide funding for a reward for information leading to the arrest and conviction of Jairo’s murderers.

Latina student receives $100,000 scholarship to attend Harvard University
2 Comments
As the White House gears up for senate debate on immigration reform, Obama preaches to the choir