Filming freedom with a Latino script 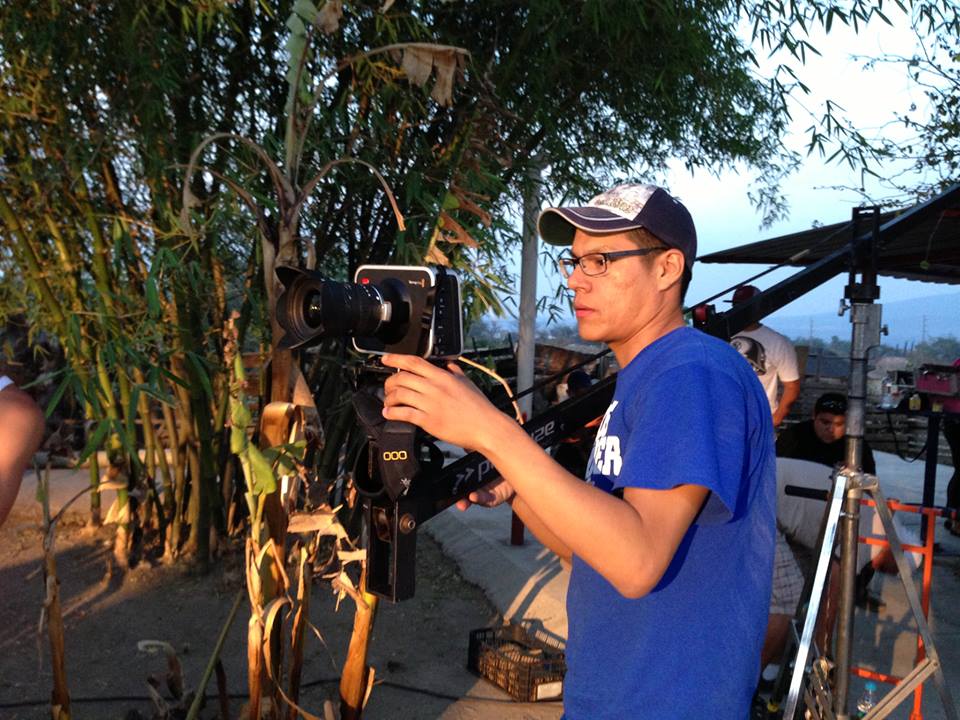 The typical image of an American soldier is that of a strong, blond hair and blue-eyed male.

That could be part of the script to a predictable war movie. However, the American armed forces are a microcosm of the real world, where ethnic diversity is not only inevitable, but necessary. So, a better script would be one showcasing precisely that.

Let’s say a Latino, who was born on the 4th of July, in the cradle of America – California. Add the twist of being raised in Mexico, coming back to the U.S. to attend high school, joining the army, serving two tours in Iraq and making a movie from a short novel written by his wife. While such a storyline has all the earmarks of an Oscar award-winning script, it is real life for Rogelio Almeida.

Californian Rogelio Almeida was born 29 years ago on July 4th in the city of Torrance, but raised in Zacatecas, Mexico.

Almeida spent 12 years in a little town called Encarnación, located in the North Central part of Mexico. “It is small and rural, but it is so colorful and full of stories,” he said. “I knew I had to leave Encarnación, then come back to the United States and study to pursue my dreams. All of my dreams were connected to my dear Mexico, but I needed a platform to launch them.”

“I quickly overcame cultural differences and different languages and traditions,” he said with evident emotion in each word. “Being exposed to my roots, to feel the warm breeze in your face, to learn that life goes beyond Corporate America is a beautiful thing. Nothing can compare to spending time with your family with a carne asada, the music, all in all (it) is a wonderful experience.”

Almeida returned with his family to the U.S. and they settled in Duncan, Oklahoma. “An Okie from California with a Mexican accent. Great combination,” he said and laughed. “I joined the U.S. Army right after high school. I am privileged because I’ve seen the best of two worlds. It was time to serve my country, so I did.”

Filming was not in the plan for Almeida, however, “life surprises you every day,” he commented. “I started using a digital camera during my second tour in Iraq. I wanted to document it. It was part of the history. And that was my training, I would say a filming crash-course,” said Almeida while describing his service in the 3rd Infantry Division of the Cobra Battery in Operation Iraqi Freedom, in 2003. “I learned many things on the Internet and I used my credit cards and savings to buy some equipment to start filming.”

His wife, Nora Contreras-Almeida, wrote a short novel in high school: Yveete. So at the end of his service, they started dreaming something big. “We want to make a movie,” he almost shouted. “We want to be filmmakers.”

So, like cooking a Mexican menudo, they started gathering ingredients: No experience. No professional actors. No budget. Just talent and courage. Those were the flavorful elements for the film. “And the final dish was delicious,” he said with a big smile on his face. That was the first step of his first film.

Almeida, who operates his own filming business, described how he taught himself to properly shoot a 35mm camera. “The harder the goal, the better and tastier are the results. It is like a good Mexican dish. It takes forever to make it, but it tastes so good at the end,” he said while moving his hands like he was holding his very first digital camera. “It was a dream come true, I mean, going back to Mexico to turn my wife’s short novel into a full length movie”.

The 104-minute movie was shot between Oklahoma and Mexico. Since its premier in 2009, Yveete has been screened in several film festivals such as the Cine Film Festival in San Antonio, Texas, the Latino Film Festival in Chicago, Illinois and the Barebones Film Festival in Muskogee, among several others.

“It was a challenge,” explained Almeida. “My wife had to play the leading role. We needed a bilingual actress. I think that was the secret of moving that project forward. We were deeply involved. A dream in the making, we were just using a film to make it real.”

Some decisions are good. Others are very good. And for Almeida, joining the army was an extraordinary decision.

“This country is amazing. You are able to serve in a war and at the same time explore and find new dreams and meanings in your life,” said Almeida. “Even better, you are able to showcase your roots, your heritage, but not only to a small group, but to everyone, everywhere. That’s the magic of filming. There are no borders, no languages, no barriers. Just dreams.”