LatinaLista — April is Sexual Assault Awareness Month. When most of us think about sexual assaults, we think of the ending rather than the beginning. For example, we envision the violence of the act, the black eye, bloodied lip and nose, bruised arms and legs and sometimes even the traumatic faces. But we don’t think about how it started. 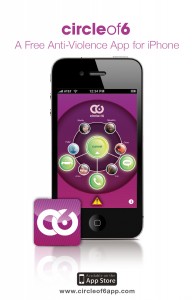 For the vast majority of sexual assaults, it doesn’t necessarily begin in a dark or unfamiliar alley — most of the time it begins in a crowded bar or party surrounded by friends. It’s one bad decision made during a time when most people have their guards down that leads to a life-changing event.

Most girls who find themselves in these situations have not had a chance to reach out to their friends for help but a simple free iPhone app is changing that. It’s called the Circle of 6 app and its goal is “to prevent violence before it happens.”

The way it works is simple:

Each user downloads the app and adds 6 contacts from their address book, creating a Circle of 6 supporters. With two finger taps, the user can send an instant message to her 6 friends if she finds herself in any of the following situations:

You’re out late and you lose track of your friends. Tap on the car icon to send your circle a “come and get me” message- with a map using GPS to show your precise location.

You’re on a date that starts to get uncomfortable. You need a polite way to excuse yourself. Tap on the phone icon to alert your circle to call you and interrupt the situation. The SMS message reads, “Call and pretend you need me. I need an interruption.”

You’re seeing someone new, but you have some doubts about how things are going. Tap the chat icon to access online information about healthy relationships. An SMS message will be ready to send that reads: “I’m looking up information about healthy relationships and respect. Just letting you know.” It lets your friends know what’s going on but doesn’t ask for immediate help.

In critical situations, the app can be used to call two pre-programmed national hotlines or a local emergency number of your choice.

The app was created by The Line Campaign, a nonprofit committed to empowering young leaders to create a world without sexual violence. Because more than one in five college women are sexually assaulted, the makers of the Circle of 6 app are pushing hard to have the app downloaded by as many students as possible.

Needless to say, the app is appropriate for any age girl/woman who finds herself in an uncomfortable situation. To spread the word and download of the app, today has been designated National Download Day. Earlier today, a tweet chat where women and girls discussed personal stories of sexual assaults or the value of the app itself was held on Twitter. The conversation can be found at #c6.

The Circle of 6 app is all about friendship and letting friends be there when you need them the most.

featured
Previous Post MEXICO — The Pope came to Mexico & left unnoticed in USA
Next PostLatina Cubicle Confidential™ — Do You Need a Career Check-Up?

MEXICO — The Pope came to Mexico & left unnoticed in USA
Comment
Latina Cubicle Confidential™ — Do You Need a Career Check-Up?