Latest get-healthy initiative from First Lady encourages everyone to Drink Up! in bilingual campaign 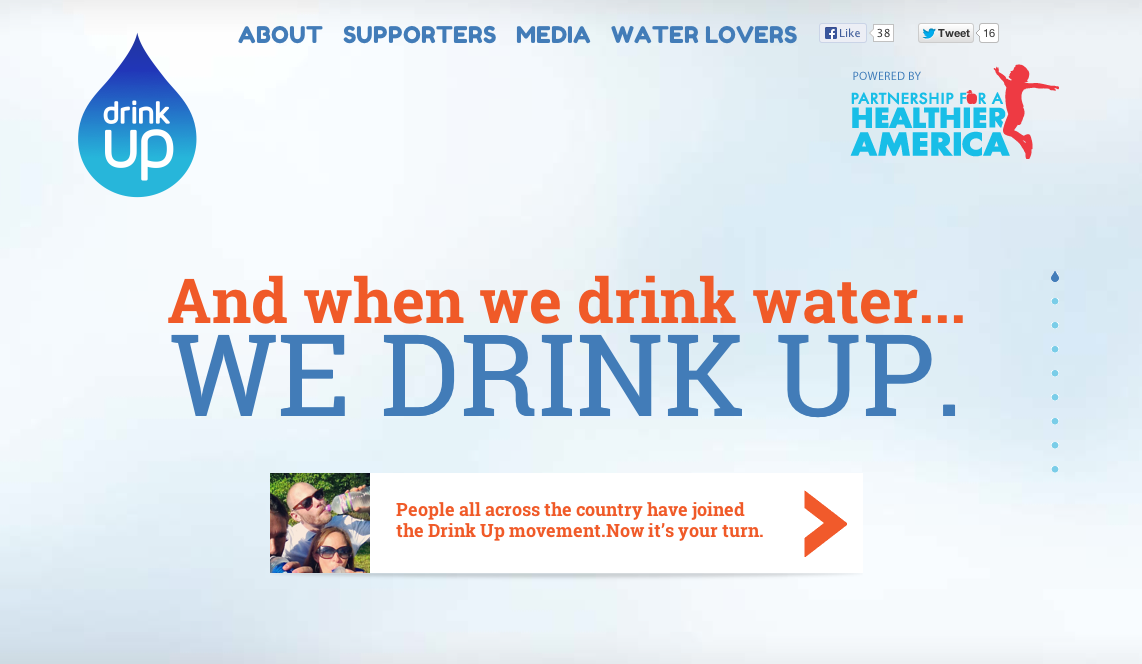 LatinaLista — In the next phase of the First Lady’s push to get the nation, especially children, to live a healthy lifestyle, the White House launched a new campaign today dubbed Drink Up!

It’s an effort to get everyone to drink more water. Speaking with reporters on a press call, executive director of Let’s Move! Sam Kass and Partnership for a Healthier America president and CEO Lawrence A. Soler, stressed that the campaign, which will be in both English and Spanish, is less of a public health campaign and more like a product launch.

It shouldn’t be too hard a sell since the beverage industry’s trade magazine, Beverage Digest, reports that more people in the country are toting bottled water than drinking cola, but disappointing statistics still exist.

The Centers for Disease Control and Prevention says a quarter of American children do not drink any water on a given day and 40 percent of Americans overall don’t drink the recommended amount.

But those stats won’t be highlighted in the Drink Up! campaign. Both Kass and Soler emphasized the fact that there won’t be any negative talk drawing comparisons between water and sodas and sugary drinks or even touting the health benefits of water. Both men were adamant that the campaign would be positive and fun, aimed at inspiring more people to drink water.

The campaign hopes to achieve this feat in several ways:

For starters, the Drink Up! campaign will be promoted across television networks among today’s morning programs (both English and Spanish), just as the First Lady and actress Eva Longoria announce the campaign in Watertown, Wisconsin — a town that has been voted for 2 years in a row to have the best water in Wisconsin by the Wisconsin Water Association.

Going forward, people will be reminded to drink more water on a daily basis when they see the Drink Up logo on “nearly 300 million packs of bottled water; more than half a billion bottles of water; 200,000 packages of reusable bottles; and more than 10,000 reusable bottles in the next year.

“Additionally, more than 10,000 outdoor public taps are expected to carry the brand over the next few years. Cities will also be utilizing the logo to encourage people to drink more tap water.”

And what would any campaign be without social media these days. Organizers are hoping people will upload pictures of themselves drinking water on their website: You Are What You Drink or on Instagram, tagging their pictures #drinkH2O

“Since we started the Let’s Move! initiative, I’ve been looking for as many ways as possible to help families and kids lead healthier lives. I’ve come to realize that if we were going to take just one step to make ourselves and our families healthier, probably the single best thing we could do is to simply drink more water,” said First Lady Michelle Obama. “That’s it – it’s really that simple. Drink just one more glass of water a day and you can make a real difference for your health, your energy, and the way you feel. So Drink Up and see for yourself.”

So how much water should a person be drinking? Eight glasses? It’s what everyone has been taught to do but health experts say that old adage isn’t really true for everyone.

To stay hydrated, a person first has to think about their weight — then divide that number in half and that’s how many ounces need to be consumed throughout the day.