Latina Lista: News from the Latinx perspective > Life Issues > Environment > Guest Voz: Latinos off to a healthy start in 2012 with a gift from the EPA

Guest Voz: Latinos off to a healthy start in 2012 with a gift from the EPA

All the world’s riches are useless without good health. And although 2011 was not a year of riches, we ended it in a healthy way.

In a historic decision, the EPA has issued new protections called Mercury and Air Toxics Standards that will block more than 90 percent of mercury emissions from coal-fired power plants from polluting the air we breathe and the water we drink. And this will especially benefit us, the Hispanic community.

The largest sources of unregulated mercury pollution are coal-fired power plants, which each year spew some 33 tons of this dangerous poison. One gram worth of mercury can contaminate a 20-acre lake, and the toxin accumulates in the fish that we eat. 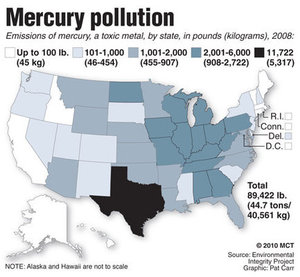 All 50 states have issued alerts regarding mercury contamination in fish. According to a Sierra Club study, more than 30 percent of Hispanics fish regularly, and 76% of them eat and share with their families the fish they catch. This means that many Hispanic fishermen may unknowingly be poisoning their loved ones.

Mercury is a potent neurotoxin that damages the brain and the nervous system, especially in fetuses and young children, as it causes birth defects, learning disabilities, decreased IQ, and even cerebral palsy. The EPA estimates 300,000 babies are born each year in the U.S. exposed to dangerous mercury levels.

The Obama administration’s historic decision has received a storm of criticism from Big Coal and its army of lobbyists in Washington, D.C., who have spent $30 million trying to defeat these standards. The critics, however, neglect the fact that this initiative will prevent 11,000 premature deaths, 4,700 heart attacks, 130,000 childhood asthma attacks, and 6,300 cases of acute bronchitis.

It undoubtedly is the biggest life-saving initiative in a generation. In fact, the standards will not only drastically reduce the emissions of mercury and other heavy metals. It will also decrease the emissions of fine pollution particles, which cause premature death, heart disease and asthma attacks.

But this is not only a gift for our health; it is also for our wallets.

According to the EPA, the new standards will create 54,000 new jobs in the installation of new filtering technologies in hundreds of antiquated coal plants and in the utility sector. And, more importantly, the standards will save up to $90 billion each year in health costs and other economic benefits.