LatinaLista — The last day of Hispanic Heritage Month, October 15, is perhaps one of the most important days of the entire month-long celebration of Latinos — it’s National Latino AIDS Awareness Day (NLAAD). 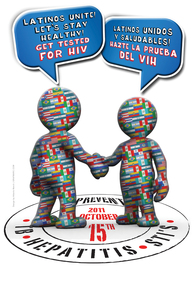 Though a lot of breakthrough has been achieve with treating HIV/AIDS and raising awareness, unfortunately, more needs to be done — especially in the Latino population.

The Centers for Disease Control reports that Latinos account for 17 percent of new HIV infections, making Latinos disproportionately affected by HIV/AIDS given the fact that Latinos only comprise 43 percent of the US population.

HIV/AIDS is the fifth largest killer of Latinos aged 35 to 44 in the United States. For Latinas, the most common forms of contracting HIV is by one of two ways: sex with high-risk partners and injection drug use.

In 2005, approximately 70 percent of Latinas living with HIV/AIDS were infected through heterosexual contact.

As the cost of medical access and medications increase across the healthcare industry, it makes sense that the smartest way to combat this deadly disease is to continue to raise awareness about the issue as widely as possible.

That’s been the job of the Latino Commission on AIDS which has been in operation since 1990.

In addition to working with Planned Parenthood, NLAAD is sponsoring a host of HIV/AIDS activities throughout the nation.

“Recognizing that our communities have faced persistent barriers to accessing health care and HIV services we need to come together to reaffirm our commitment to increase HIV/AIDS awareness in all Latino/Hispanic communities,” stated Guillermo Chacón, president of the Latino Commission on AIDS. “We cannot miss anybody. HIV does not discriminate.”