Latina Lista: News from the Latinx perspective > Life Issues > Health > New CDC study shows Latina teen moms more likely to have a second birth though they know how to prevent it

LatinaLista — The first time a teenage girl gets pregnant it can truthfully be called an accident but a second, third or fourth time?

A new analysis by the Centers for Disease Control reveals that while everyone can celebrate the fact that there’s a decline in teen birth rates, the same can’t be said for repeat birth rates. 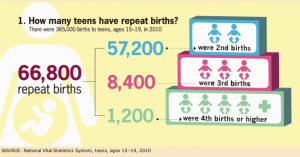 According to the analysis, 86 percent of teen births are second births — 183 repeat teen births occur each day in the U.S. The CDC classifies these second births as “rapid repeat teen pregnancy” and finds that they are more prevalent in Texas, Arkansas, Louisiana, Mississippi, Georgia, Oklahoma, Nevada, and Arizona.

Is it a coincidence that most of those states have high Latino populations? And most of them are located in the so-called Bible Belt where accurate sex education in the schools is frowned upon and abstinence-only is heavily promoted in the schools?

American Indian and Alaskan Natives, Hispanics, and black teens are about 1.5 times more likely to have a repeat teen birth, compared to white teens.

While this news isn’t good, it was encouraging to see in the analysis that of all teen mothers, Latinas were the likeliest to use the most effective types of birth control.

So, it begs the question: If Latina teen moms know and are using the most effective types of birth control, are they having more children on purpose?

Studies show that having one child as a teen mom is a challenge for that mother, both socially and academically, and also for that baby growing up if there is not a strong family support system, but to have more than one child implies perhaps the most discouraging of all the news: that the teen mom doesn’t see herself as pursuing a college degree or training of any kind and the only role she sees for herself in the future is that of a mother — even if it’s before her time.

featured, Latina teens, repeat births, teen pregnancies
Previous Post It must be the year of the Latino: AP announces it's dropping the 'i' word
Next PostIntrn'l Video: Film recounts horrifying experience of 9-year-old boy SMUGGLED into the U.S.

It must be the year of the Latino: AP announces it's dropping the 'i' word
1 Comment
Intrn'l Video: Film recounts horrifying experience of 9-year-old boy SMUGGLED into the U.S.