LatinaLista — The pictures from a new report titled, A Culture of Cruelty: Abuse and Impunity in short-term U.S. Border Patrol custody, about border patrol agents’ abuse against immigrants they have in custody are not just disturbing but repulsive. 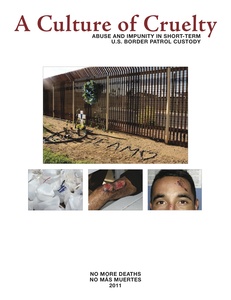 Compiled and published by the human rights group No More Deaths, the authors documented more than 30,000 incidents of abuse and mistreatment from fall 2008 to spring 2011. The sad thing is that the abuse complaints have remained consistent over the years No More Deaths has been documenting testimony from detained immigrants.

Abuse complaints range from: “Individuals suffering severe dehydration are deprived of water; people with life threatening medical conditions are denied treatment; children and adults are beaten during apprehensions and in custody; family members are separated, their belongings confiscated and not returned; many are crammed into cells and subjected to extreme temperatures, deprived of sleep, and threatened with death by Border Patrol agents.”
The authors feel that the abuses occurring within the Border Patrol is systemic within the culture of the agency and that any past attempts calling for the agency to reform its practices or be more transparent have been ignored to the detriment of the health and safety of the immigrants.

Border Patrol agents denied food to 2,981 people and gave insufficient food to 11,384 people. Only 20 percent of people in custody for more than two days received a meal.

Physical abuse was reported by 10 percent of interview- ees, including teens and children. The longer people were held in custody, the more likely they were to experience physical abuse.

1,051 women, 190 teens, and 94 children were repatriated after dark in violation of the Memorandum of Understanding between the Mexican Consulate and U.S. Customs and Border Protection and, in the case of children, the Trafficking Victims Protection Reauthorization Act (TVPRA) of 2008.

The alleged treatment inflicted upon the detained immigrants at the hands of the Border Patrol agents is a stain on the integrity of this country and what this nation has historically prided itself on — a champion of human rights.

A review of this report immediately illustrates there is something terribly wrong in this agency that needs to not only be addressed but reformed.