LatinaLista — Hunger costs our nation at least $167.5 billion. It’s a cost that is only getting larger as more people are hit by the recession and are having to choose between buying food or paying for housing and utilities. 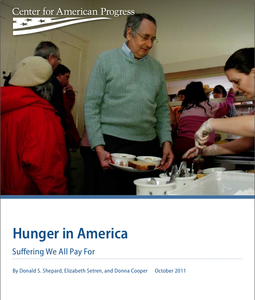 In the just released report: Hunger in America: Suffering We All Pay For published by The Center for American Progress, it’s reported that sixteen percent of the US population is now facing food insecurity.

Food insecurity is more than just a growling stomach or a headache from not eating. It also affects a person’s health — if a person is too weak, their body can’t fight off infection as easily — and it affects how a person learns in school. If they’re hungry, getting food is their main focus — not the lessons of the day. These two situations also contribute to hunger costs a state faces since medical conditions brought about by hunger must be treated and doing badly in school due to hunger adds to the cost of lost educational opportunities.

The cost of hunger also includes the value of all donated foods to food pantries and shelters to feed on an emergency basis people who are going hungry.

Fifteen states experienced a nearly 40 percent increase in their hunger bill compared to the national increase of 33.4 percent. The sharpest increases in the cost of hunger are estimated to have occurred in Florida (61.9 percent), California (47.2 percent), and Maryland (44.2 percent).

The rising cost of hunger isn’t just a bill being covered by states or local city governments. It’s a cost everyone is having to pay. The report highlights the fact that the nation’s hunger bill cost us at least “$542 per person, or $1,410 for every American household.”

According to the report, the only sure way to help people achieve food security is with jobs.

People going hungry need to make enough money so as to not have to decide between putting food on the table or paying the rent or mortgage.

These are choices that no one should have to make, and yet, more and more people are going to bed each night wondering how they will get their next meal.