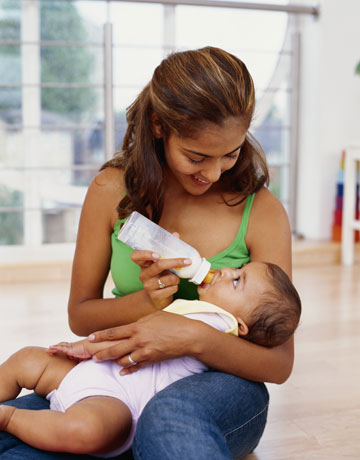 LatinaLista — One of the main reasons most often cited as to why school-age children huff and puff their way across the playground is because they’re not getting enough exercise. Experts and healthcare providers agree that this kind of behavior, if not corrected, can only lead to a fat adulthood.

Yet, a new study by the University of North Carolina School of Medicine reveals that obese children may have been set up for weight failure long before they hit the books — by their parents and while still in the crib.

The study looked at 863 low-income parents, 50 percent of whom were Latino, 27 percent black and 12 percent white. What the researchers found was that behaviors associated with developing obesity later in life was reflected in the parenting skills of the parents in the study.

Exclusive formula-feeding was more than twice as common (45 percent) as exclusive breastfeeding (19 percent). Twelve percent had already introduced solid food, 43 percent put infants to bed with bottles, 23 percent propped bottles instead of holding the bottle by hand (which can result in overfeeding), 20 percent always fed when the infant cried, and 38 percent always tried to get their children to finish their milk.

In addition, 90 percent of the infants were exposed to television and 50 percent actively watched TV (meaning parents put their children in front of the television in order to watch).

Latino parents were found guilty of pushing the babies to finish their bottles of milk and letting their infants spend less time on the floor on their tummies playing.

According to the researchers, these types of behaviors are categorized as “obesogenic” behaviors and lead to one logical conclusion.

“What this study taught us is that we can do better. While we don’t know the exact causes of obesity, families of all races and ethnicities need early counseling to lead healthier lives. That counseling should be culturally-tailored, and we are hoping our research sheds light on the best ways to do that,” says Eliana M. Perrin, lead author of the study, associate professor of pediatrics in the University of North Carolina School of Medicine and a practicing pediatrician.