LatinaLista — Time and time again over the last few years, we have seen how politics trumps common sense and common decency when it comes to protecting the most vulnerable in the nation. 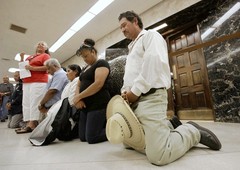 It has happened again.

Last night, California Gov. Jerry Brown ignored the pleas of farm workers and their families and supporters and vetoed the Fair Treatment for Farm Workers Act.

The bill would have allowed farmworkers “to organize by signing a petition away from the fields, rather than holding a secret ballot election as they do now.”

To most of us, that doesn’t sound like much but in an industry that has historically intimidated and threatened its workers, it was, and remains, a big deal.

Unfortunately, the ones that were successful in getting this Democratic governor to veto a bill that supported workers’ rights were none other than the growers who have a lot to lose if farmworkers unionized.

Because if farmworkers unionized, there would finally be a collective voice that could not only demand better working conditions — like more frequent water breaks — improve their living conditions — a huge upgrade from third-world conditions most live in now — but demand pay that allows for some quality of life.

The majority of these employers are accustomed to keeping their workers so subservient that they felt fully justified in opposing this bill and didn’t mind sharing their reasons for opposing it.

Growers and other business groups say greater unionization in the fields will boost food prices.

So, rather than let a group of hardworking people, who are already doing the kind of backbreaking, sweaty labor no American wants to do, have a decent quality of life, our political system legalizes an arrangement that keeps farmworkers the nation’s “voiceless” servants.