LatinaLista — During the holidays, there are three things most people will have in their homes: wrapped gifts, extra sweets, and alcohol. Just as it’s hard to keep young people from shaking a gift or two or digging into fudge or a stack of buñuelos, it’s hard to keep some young people from drinking, especially when during the holidays alcoholic drinks are wrapped in so many different flavors, come in different colors — and is made to look so cool to do in commercials, music videos and on billboards. 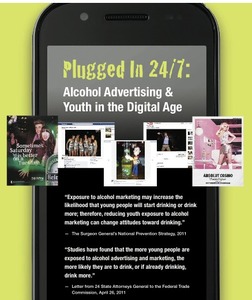 In all honesty, the debate over media promoting alcohol to young people has been ongoing since the last century but exposure via social media is an all new phenomena garnering much more scrutiny. Today, “the Center on Alcohol Marketing and Youth (CAMY) at the Johns Hopkins Bloomberg School of Public Health released a new brochure and a four-part YouTube movie showing the alcohol industry’s push into digital marketing.

The researchers wanted to know if the industry is doing enough to protect underage youth from being exposed to the “alcohol experience” on social marketing platforms. As it is, alcohol is the number one drug problem among young people, outpacing tobacco and marijuana usage. The American Medical Association reports that “approximately 11 million American youth under the age of 21 drink alcohol. Nearly half of them drink to excess, consuming five or more drinks in a row, one or more times in a two week period.”

When the researchers looked at advertising, they were surprised at their findings:

This increase in youth exposure to alcohol advertising on U.S. television occurred despite efforts by alcohol companies to strengthen their self-regulatory standards. The average number of alcohol ads seen by youth watching television increased from 217 in 2001 to 366 in 2009, or one alcohol ad per day.

When researchers focused on social media, the story wasn’t any different.

Though all alcoholic sites have visitors sign in via an “age affirmation” page, it’s clear that it’s a joke since most kids inflate their ages just to gain access to the site.

But that wasn’t the only red flag online:

Fans of brands with youth appeal had also uploaded 15,416 photos and 98 videos to the brand Facebook pages, taking their messages viral. Images of Santa, toys, and sexually suggestive photos as well as those indicating binge consumption of alcohol are on the industry’s social media sites despite the industry standards.

“Over and over again, youth are more likely to hear, read or see alcohol ads in mainstream media, and brands are now taking their messages from their branded sites to social media platforms such as YouTube, Flickr, Twitter, and Facebook,” said David Jernigan, Director of the Center on Alcohol Marketing and Youth. “As teens are early adopters of social media and there are viral elements of this media, parents need to be more aware of this marketing and to educate their children about the real harms of underage drinking in spite of the industry’s message of glamour and allure.”