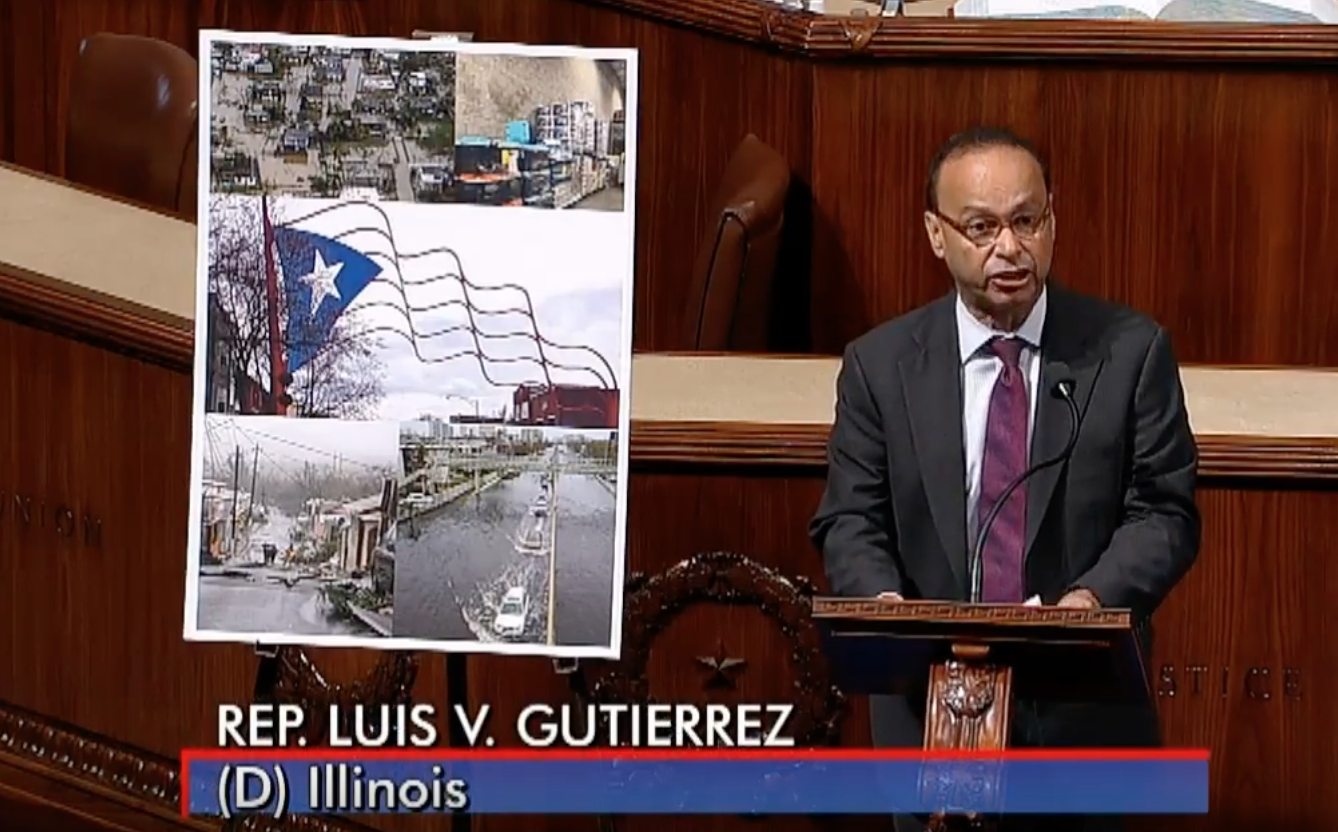 LatinaLista — Rep. Luis V. Gutiérrez is a Member of the Judiciary Committee and the Chair of the Immigration Task Force of the Congressional Hispanic Caucus. Today, he spoke on the House floor about the humanitarian crisis unfolding in Puerto Rico a week after it was struck by Hurricane Maria, the second hurricane to hit the Island in September.

No, Mr. President, Puerto Rico relief is not going well.

We don’t need to be reminded of the debt.  We should remind ourselves of our responsibility to the 3.4 million people of the Island Nation of Puerto Rico.

They are suffering greatly.

Mr. Speaker, the people of Puerto Rico need our immediate and sustained help.

We all know that flooding, destruction, and the complete elimination of the power grid for the whole Island are among the consequences of Hurricane Maria, but this was no ordinary hurricane and it hit at no ordinary time.

Mr. Speaker, we need all hands on deck and to make rescuing Puerto Rico our number one priority.  Immediate needs must be met – fresh water, food, medicine, shelter and fuel.  But we will need sustained investment and cooperation with the Island’s government and its people to make Puerto Rico livable again.

Like a lot of Americans, I have watched with increasing horror and panic as the Governor of Puerto Rico, the Mayor of San Juan, and ordinary Puerto Ricans have pleaded for more help.  The work of first responders and our military has been heroic, but the Island needs more.

Hospitals have no doctors, nurses, fuel and medicine – at the hospitals that remain open.

This is a public health crisis and should be declared a health emergency by the federal government.

Puerto Rico has been in economic crisis for years.  Five thousand people flee Puerto Rico every month, before two hurricanes hit, leaving behind many old, many young, the very sick, the very poor, and the very vulnerable.

There is no food in supermarkets.

We need an airlift.  We need an effort the scale of Dunkirk.

We know the U.S. is capable.  We can invade foreign countries with hundreds of thousands of troops, flawless communications, food and security.

We need the same effort now.

We need the federal government to go all in to rescue Puerto Rico from a humanitarian crisis and welcome other nations if they want to help, like Cuba which has offered doctors and other emergency assistance.

But what I fear is that the federal government is not stepping up as fully and as quickly as we must.

I remember in this body when the legislation to take over the Puerto Rican government and put in place a Junta or Control Board was working its way through Congress, the PROMESA Bill.

What was the main selling point for the bill?

Vote for PROMESA because it will not cost us a penny!

We need to waive cost-sharing that would charge Puerto Rico for a percentage of the relief and rescue help they are receiving.  Puerto Rico is broke, they cannot borrow and they cannot set their own budgets and spending priorities – that was all taken away from Puerto Rico.

So the U.S. government should start by waiving those cost-sharing requirements and suspend the Jones Act permanently or for a substantial period of time – at least a decade – in order to help in the recovery.

Since it was imposed on Puerto Rico, the Jones Act has cost Puerto Rican consumers more than all the money owed to Wall Street, yet the President reminds us of the debt in his tweets.

Let the ships flow as quickly and as cheaply from wherever they may come from because this is an emergency.

Let’s be clear, with or without hurricanes, the electrical grid, the roads, ports, public safety and public health systems are close to collapsing, so this emergency cannot just be treated by Congress, the President, FEMA and the other agencies as just another storm.

Mr. Speaker, I have asked the Speaker of the House and the Democratic Leader to form a delegation to send Members to Puerto Rico so they can see for themselves how dire things are.

I am leaving early on Friday to go there and I am hoping other Members will join me.

I have family who need help, so I am headed there to do what I can do.

But most importantly, I am committed to shining a spotlight on the people of Puerto Rico so that they are neither out of sight nor out of mind.

A video of the Congressman’s speech is here: https://youtu.be/UJs6RgjIIQk