LatinaLista — The US Census has repeatedly confirmed that Latinos are leading the change in national demographics and will be the largest ethnic group in the coming years. Already in some urban public schools, Latino schoolchildren fill more seats. 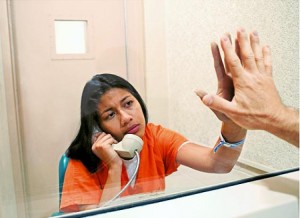 Unfortunately, there is a new area where Latinos, specifically Latinas, are also leading the change in demographics — prison.

In fact, white women and Latinas are now outpacing black women when it comes to time behind bars. Incarceration rates for white women rose 47 percent from 2000-2009.

According to an analysis of data from the Bureau of Justice Statistics, Latinas are committing more violent and property crimes. The researchers conclude that the property crimes may be related to drug crimes.

…So, any overall changes in rates of drug use by race may influence involvement in property crime. It is also possible that changes in relative rates of property crime commission may be related to the differential impact of the economic changes of the past decade, by race and/or geography.

Some observers have suggested that changes in women’s incarceration by race are driven by increased arrests for prescription drug offenses or changes in the drug of choice among those who engage in such practices. Because of the rise in the use of methamphetamine, a drug disproportionately used by whites and Latinos, in certain regions of the country white women may now be more likely to come under criminal justice supervision.

Interestingly, the report’s authors note that “it is now reasonable to conclude that at least two Americas have formed, with notably different longevity prospects.” The reason they have arrived at this conclusion is because they have noted that the white women comprising the largest increase in incarceration rates “have limited access to healthcare, limited ability to cope with stress or manage chronic illness, live in poverty, and have high levels of unemployment.”

All of these factors that have plagued African American and Latino men and women for decades — with no one ever acknowledging ‘two Americas’ until a new reality emerged.