LatinaLista — A study last month by Harris Interactive measured how much Americans are dining out to gauge whether or not economic recovery is occurring. The study’s authors found that while over 60 percent of people had dined at a quick-service restaurant the previous month, many are cutting back or becoming more selective when going out to eat because of tight budgets. 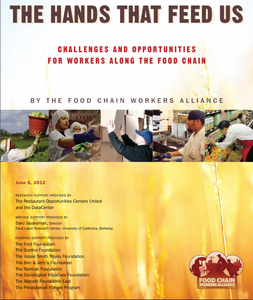 While it’s positive news for the dining industry that people are still willing to spend the cash on eating out, it’s not so good news for the servers, busboys, kitchen help and hosts and hostesses who rely on customers to help with their salary shortfalls in an industry that is notorious for underpaying, overworking and viewing employees as expendable.

A new report released by the Food Chain Workers Alliance, The Hands That Feed Us: Challenges and Opportunities for Workers Along the Food Chain, is the first of its kind that examines the wages and working conditions of workers “across the entire food chain” — a number that comprises one-sixth of the nation’s workforce — 20 million people.

For the report, 700 workers and employers were interviewed. They worked on farms and in slaughterhouses, warehouses, grocery stores, restaurants and more. The authors noted that while there were some employers who did an outstanding job by their employees and offered benefits, they were not the norm.

With pervasive conditions such as these, it’s not hard to understand that a certain attitude has evolved regarding the value of food chain workers — from both employers and customers. Since the industry is consumer-driven, the report’s authors cite how consumers have the perfect opportunity to help transform an industry that accepts sub-standard working practices as acceptable.

To help change the industry, the report suggests policymakers, consumers and employers can do a number of things which include:

The safety of the food chain is imperative for the physical and economic health of the country. So, it makes sense that the people whom the country relies on for providing us that food should be just as valued, appreciated and treated well in their workplaces as the rest of the nation’s workers.