The Southeast United States is home to more kinds of freshwater animals than anywhere else in the world, but sadly, it has also suffered more than 50 species extinctions in recent times. This sobering fact is a clear indication that our freshwater ecosystems are in trouble. 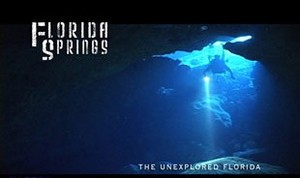 In Florida, scores of imperiled species depend on a certain quality and quantity of freshwater found only in caves and springs. These karst formations are the result of slow water deposition through porous bedrock, and the species that have evolved to live in these habitats are biologically important because they are specially suited to survive in typically wet, dark conditions. Unfortunately, Florida’s cave and spring systems are threatened by increasing water demands and pollution.

Healthy caves and springs rely on healthy aquifers. The most prominent in Florida is the Floridan Aquifer. It is one of the most productive aquifers in the world and supplies water to several major cities, including Jacksonville, Orlando, and St. Petersburg, Florida. However, the aquifer is subjected to intense pumping for municipal and agricultural purposes, and the waterbodies it feeds are impacted by water pollution.

The Ichetucknee River, an entirely spring-fed, crystal clear river, makes the Ichetucknee Springs State Park a popular tourist destination. However, the Ichetucknee springs are threatened by diminishing springs output brought on by drought and groundwater pumping, and nitrate pollution from atmospheric deposition and nearby pasture and crop lands. These threats compound with the snail’s extremely limited distribution to make it in imminent danger of extinction.

Meanwhile, the Orlando cave crayfish is found in a handful of isolated, flooded limestone caves near the Orlando metro area. These 5 locations support fewer than 1000 individuals. Rapidly expanding human population and water consumption affects the quantity and quality of groundwater reserves, putting the entire range of Orlando Cave Crayfish at risk.

Decades ago, the U.S. Fish and Wildlife Service found that the Orlando cave crayfish warranted listing as an endangered species under the Endangered Species Act, but never finalized the listing. Similarly, in 2011, the Service determined that the Ichetucknee siltsnail may warrant protection under the Act.

Listing these species under the Act could help prevent the ongoing destruction of these karst habitats and the Floridan aquifer. However, the Service has failed to finalize the protections and was recently put on notice that if it fails to move forward with protections, it may face legal action.

Florida karst habitats face a variety of threats – the full protections provided by the Act, along with proactive water management and stewardship, are needed to help address Florida’s freshwater challenges.