LatinaLista — For a nation of immigrants like the United States, it’s not surprising that each ethnic group has its own set of concerns that they see impact their families and themselves. Yet, because of language or immigration status, many times their opinions get overlooked in the usual phone surveys used to gauge such opinions. 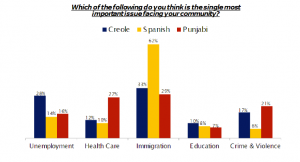 Languages like Creole, Punjabi, and yes, at times, Spanish prove challenging to surveyors who may only speak English or aren’t really fluent in a second language.

That’s why a new survey by AudioNow highlighting the under-recognized opinions of certain ethnic groups is so important. AudioNow, a platform that enables listeners to tune into their favorite member radio stations via their cellphones and who is a partner to many ethnic radio broadcasters, conducted a multilingual survey getting members of the Spanish-Creole-Punjab-speaking communities to share their thoughts on current issues facing the country.

While most of the answers underscore the basic fact that people in the United States care about the same issues, there definitely are differences as to the degree with how much they really care. The phone survey was conducted in February 2013 with 2,040 “news attentive listeners,” in their native languages and who were listeners of several of AudioNow’s broadcasting partners.

Not surprising, all three of the groups surveyed felt the number one issue facing their community was immigration. Again, not a big shock was that Spanish-speakers by far felt the issue was of the utmost importance. But the survey shows there does exist a bit of a discrepancy within the Latino community:

In fact, when it comes to citizenship, the survey shows that Spanish-speaking citizens cared a little more than Spanish-speaking non-citizens on a range of issues like healthcare, unemployment, crime and education.

It makes sense that non-citizens wouldn’t care so much about those issues like healthcare and unemployment since they don’t qualify for receiving those benefits — a job or healthcare coverage — but it is surprising that they don’t care more about education.

In the survey, 10 percent of Spanish-speaking citizens cared about education versus 7 percent of non-citizens. It’s an odd divide given that a healthy percentage of Latino children enrolled in public schools have parents who are non-citizens.

It’s something that warrants closer scrutiny among educators trying to improve the graduation rates of Latino students.

The survey also touched on the hot-button issue of gun control.

The voters within each of these ethnic communities show strong support for stricter gun control laws as well.

Eighty-­‐four percent of voters who cast a ballot in the 2012 election favor new laws on this issue. Included are 97% of Creole
voters, 87% of Spanish speaking voters, and 76% of Punjabi voters.

From the results, it’s easy to see that most surveyed feel like the majority of Americans who want common sense to prevail in determining who gets to have a gun in this country and who doesn’t.

Yet, if there was one revelation from this survey that shows just how important it is to take into account the views of immigrants in this country, it would be this:

Of 1,138 interviews conducted among adults who were eligible to vote in 2012, a full 71% of respondents report actually voting – approximately 10% higher than the national average in recent presidential elections.

Filmmaker travels the United States documenting abandoned homes: An Interview with Eve Morgenstern
Comment
GOP governors' denial of Medicaid expansion in their states is one outreach Latinos will take to heart — and to the polls