LatinaLista — The world is twelve years into the 21st Century and yet there still exists an attitude towards women that attempts to delegate them as second-class citizens incapable of making their own decisions. The United States used to be thought of as the last country to be guilty of such insulting ignorance. 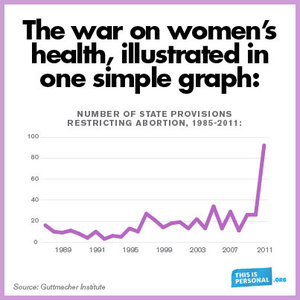 In 2011, legislators in 24 states passed 92 provisions restricting abortion. That’s more than double the number from any previous year. These restrictions run the gamut from prohibiting insurance coverage of abortion to medically unnecessary ultrasounds and burdensome clinic regulations. [/caption]

After all, women in the U.S. can drive, open bank accounts, travel freely — without permission legally from either husband or father, own a home, get an education, etc. Rights denied to many women in third-world and religiously restrictive countries.

Yet, in the last few years, U.S. legislators have been resembling their legislative counterparts in these other countries when it comes to increasingly denying women the right to know what is best for them.

According to the National Women’s Law Center (NWLC):

Nationwide, women’s reproductive health care is under unprecedented attack. Birth control and abortion have become national topics of conversation in recent months, following highly publicized efforts to restrict access and inflammatory comments by a number of public figures. In 2011, state legislators proposed more than 1,100 provisions on women’s reproductive health care, the vast majority of which were restrictions on things like birth control, maternity care, screenings for breast and cervical cancer, treatment for sexually transmitted infections, abortion, and reproductive health education; 109 of these measures were enacted, effectively chipping away at a woman’s ability to make decisions for herself.

Unfortunately, until women come face to face with such restrictions there is no sense of urgency to speak out about them. But by the time that moment arrives, it may be too late.

Any effort to counter these harmful measures, three things must happen: 1. Women of all ages need to be aware of these laws and their direct impact on them; 2. Women must be pro-active in speaking out against these measures and 3. Women must contact state and national legislators to protest these measures and remind these representatives that their personal religious and moral beliefs should not be forced on women who don’t share them.

In other words, they need to stop passing legislation that encroaches on the highly personal reproductive health care decisions of women. To remind legislators of just how personal this issue is, the National Women’s Law Center (NWLC) launched a new campaign — This is Personal.

The campaign is all about empowering and equipping women with the facts, the resources and the means to reach legislators to stop, what is being described as, a war on women.

The site features online petitions targeting specific state legislators and politicians; graphs that visually lay out the national increase in ‘anti-women’ bills; satirical videos pointing out the absurdities of the legislation and how to get involved.

At a time in our history when we are looking for more women to join the ranks of board rooms and CEOs; blaze a path towards being engineers, scientists, technologists, inventors and medical doctors; and undertake campaigns for public office — not to mention the highest public office in the land — it is prehistoric and destructive thinking that would take a population, that is more than 50 percent of the nation, back to a time in history that is not remembered with any fondness or nostalgia, but only used as a marker to celebrate how much progress has been made since then.

In this context, progress is as dirty a word to these legislators as is a woman’s right to personal responsibility.