Latina Lista: News from the Latinx perspective > Life Issues > New magazine gets a headstart helping immigrants come out of the shadows

LatinaLista — Immigration reform is going to happen. That’s a given. What’s still up for debate is the details. Yet, one thing is certain — undocumented immigrants will be brought out of the proverbial shadows. 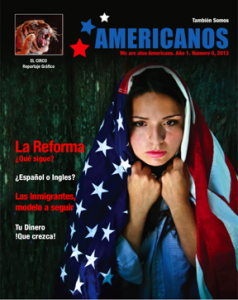 While many of the 11 million waiting for the bill to be passed have called the US home for years, many have not fully integrated themselves into US society. Maybe out of fear, not speaking English fluently, not understanding how the US system works, etc, the reasons are numerous but to realize the American citizenship dream, it’s something they will all eventually have to do.

One new magazine is getting a headstart in helping undocumented immigrants do just that. Tambien Somos AMERICANOS (We are also Americans) is a monthly print publication published in Spanish to serve as a resource for their readers and educate them on the culture and morals of the United States.

Editorially, rather than focus on the immigration issue Tambien Somos AMERICANOS cares about immigrants, its economic dynamism, its role as interested consumers, as parents, as active members in their communities.