LatinaLista — Whether it’s called the “Breadbasket of the Nation” or the “Backbone of America” or even “Main Street USA,” the small towns that make up what is known as rural America have taken a hard economic hit. In fact, there have been reports over the years of rural America dying. 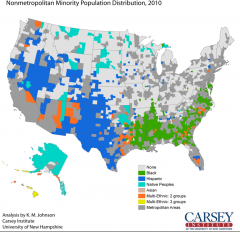 Yet, a new report released today by the Carsey Institute at the University of New Hampshire (UNH) brings to mind that famous quote from Mark Twain: “The reports of my death are greatly exaggerated.” Not because white farming families, who had left their farms in search of city employment, are returning, but because young Latino families are now calling rural America home. “Young” being the operative word.

In the report, Rural Demographic Change in the New Century: Slower Growth, Increased Diversity, the authors found that while the rural population growth slowed because fewer people were moving into rural areas after 2000, diversity actually accelerated. Racial and ethnic minorities accounted for 83 percent of rural growth between 2000-2010. Researchers say Latinos are to be credited for most of that growth.

Kenneth Johnson, senior demographer at the Carsey Institute and professor of sociology at UNH, pointed out that though minorities accounted for the majority of rural population gain between 2000 and 2010, minorities still only represent just 21 percent of the rural population overall.

Yet, what makes this discovery promising is the children in Latino families who are settling in rural America.

“Young people clearly are a harbinger of future racial-ethnic change and diversity in rural America, as deaths among the older largely white population are replaced disproportionately by minority births,” Johnson says.