LatinaLista — Since 2001, Texas’ Dallas County has exonerated 32 men who were wrongfully convicted and sentenced to jail for crimes they didn’t commit. The latest two to receive an apology from the court were Raymond Jackson and James Williams who were convicted of kidnapping, raping and shooting a woman in 1983. 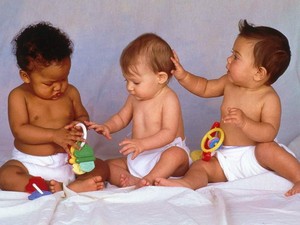 Their conviction was based purely on the victim identifying them as her attackers. Unfortunately, that’s the story behind the majority of wrongful convictions when white witnesses are asked to identify their assailants from a line-up featuring African American suspects.

There’s a running gag among Latinos, African Americans and Asians that minorities of the same ethnic group look “all alike” to whites. Sometimes, the same is said of people from different ethnicities too. But being mistakenly locked away for 30 years is no joke and both the victims and the wrongfully accused suffer because of the mistake.

A new study shows that the reason for misidentifying someone of a different ethnicity doesn’t start with a crime but before we even take our first steps.

Psychology researchers at the University of Massachusetts Amherst found that even though babies are born with the ability to tell people apart within multiple races, by the time they’re 9 months old, they start to lose that ability and are better at recognizing faces and emotional expressions of people within groups they interact with the most.

The researchers found that by 9 months, infants show a decline in their ability to tell apart two faces within another race and to accurately match emotional sounds with emotional expressions of different-race individuals.

So what that means is if a white child never interacts with people of color in their formative years, then their ability to be a credible witness as an adult to a crime involving minority suspects should not be given as much weight in deciding court cases?

The study was done with 48 Caucasian infants with little to no previous contact with African-American or black individuals. Yet, the study brings into question how these same cognitive abilities formed in infancy affect minority populations in accurately identifying people of other ethnicities and how much skin color and facial features impact mistaken identity.

“…the results of this research may serve as a guide for early education and interventions designed to reduce later racial prejudice and stereotyping,” Lisa Scott, the report’s author, states. “These results suggest that biases in face recognition and perception begin in preverbal infants, well before concepts about race are formed. It is important for us to understand the nature of these biases in order to reduce or eliminate them.”

Mexico's poet, Javier Sicilia, calls for unity to help combat Mexico’s violence
5 Comments
In light of Pew Hispanic research, why are the GOP still authoring border security bills like it's 2005?